Three students from the Centre for Microbial Ecology and Genomics (CMEG) at the University of Pretoria (UP) recently had their honours research published in international peer-reviewed journals. Ms Storme de Scally, Mr Felix Oloo and Mr Andries van der Walt all completed their honours degrees through the Department of Genetics in 2015. Their work was published in Soil Biology and Biochemistry, Scientific Reports and Applied and Environmental Microbiology respectively. Work submitted to these journals is extensively reviewed and it often takes more than six months from submission to final publication.

At CMEG, researchers study some of the most abundant organisms found on the planet – microorganisms. Because these organisms are not found in isolation in nature, researchers use a combination of molecular techniques, dubbed 'meta-omics', to determine the entire microbial species composition found within a given sample from the natural environment. Microbial communities are large contributors to processes involved in climate change, and they are especially dominant within 'less complex', extreme environments, including hot and cold deserts such as the Namib Desert and Antarctica, deep sea hydrothermal vents, sub-Antarctic regions such as the Argentinian peat bogs, and marine systems such as the Southern Ocean. Studying these climatically extreme environments enables scientists to see how microorganisms interact with each other and drive global processes such as drawdown of carbon from the atmosphere – the process that once filled our planet's atmosphere with life-giving oxygen.

Under this theme, Ms De Scally based her research on the Antarctic Dry Valleys. This region of Antarctica features average air temperatures below -15°C and is one of the driest regions on the planet, receiving less than 100 mm of precipitation per year. Because plants and animals cannot withstand these extreme conditions, microorganisms dominate the Dry Valleys soil environment. However, this environment is changing owing to climate change and global warming. Ms De Scally's research published in Soil Biology and Biochemistry assessed the impact future temperature increases may have on these microbial communities. Her work is reassuring in that it found the communities to be resistant and functionally stable, showing no significant shifts in response to changing temperatures. This is not the full story however, as her study was only conducted over a short period of time and there are many other factors that may influence how microbial communities react. Ms De Scally is currently working on her MSc in genetics, in which she again tackles the influence climate change may have on microbial communities, but this time looking at the effect of a decrease in ocean pH on Southern Ocean microorganisms. She plans to pursue a career in academia and has a bright future ahead of her, having already won the Best Oral Presentation prize at the South African Society for Microbiology Biennial Congress earlier this year.

Mr Oloo moved closer to the equator for his research, working on the peat bogs of Tierra del Fuego in Argentina. Peat bogs are wetlands which accumulate peat – decomposing carbon-rich plants. The large amount of dead plant material and the cold temperatures, however, prevent decomposition from occurring quickly enough to keep up with the addition of new dead plant material. Because of this, microorganisms play large roles in maintaining the carbon balance, and if the 'wrong' microorganisms come to dominate, this can lead to a massive release of carbon into the atmosphere in the form of methane. The work published in Scientific Reports evaluated how microbial communities differ among various 'zones' in the peat bogs – plant-free areas, vegetated areas and decomposing areas. Mr Oloo and his colleagues found that local environmental factors determine which microorganisms dominate in each zone. Since completing his research, Mr Oloo has decided to broaden his horizons and is currently employed by Barclay's Africa as a data analyst. He is on his way to making a global impact, as during his short time as an honours student, he not only published in an international peer-reviewed journal, but was also the vice president of the student society Enactus, a community involvement programme targeted at improving the world we live in.

Mr Van der Walt conducted his research a bit closer to home, working on the fairy circles of the Namib Desert. Fairy circles are round, random, barren patches of soil in an area normally dominated by grasses. Scientists have been wondering for decades what causes this phenomenon. Some say that it is termites, some that it is seepage from underground, and others that plants are able to organise themselves in this way. The work done by Mr Van der Walt and his colleagues, published in Applied and Environmental Microbiology, argues that the fairy circles are caused by microorganisms. The authors found some microorganisms inside fairy circles that are not present outside, some of which are known to cause plant disease. Mr Van der Walt is taking this research further in his MSc in bioinformatics, this time looking not only at what is there, also at what they are doing. He says he wants to stay in academia and would eventually like to go into astrobiology, the study of life on other planets. 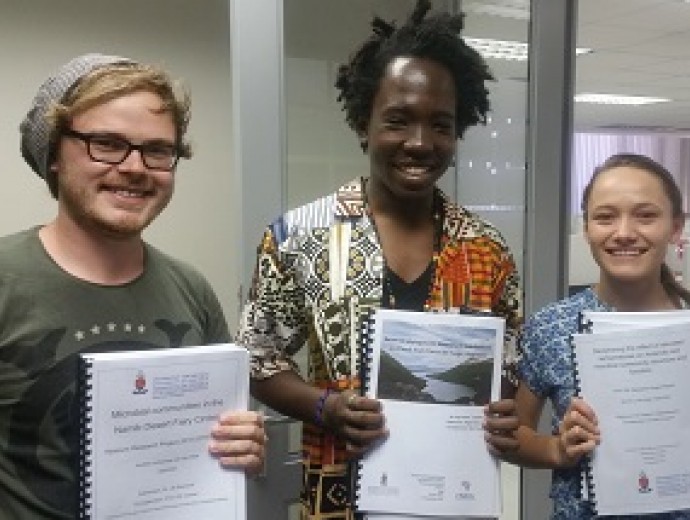