They are called extremophiles - microorganisms that can survive under extreme conditions such as in the Namib Desert or the Antarctic Dry Valleys. Scientists think some of them could be playing a significant role in critical biological cycles such as nitrogen and carbon fixation.
Dr Thulani Makhalanyane, a researcher at the University of Pretoria’s Centre for Microbial Ecology & Genomics has become a leading expert on one such community of microbes, known as hypoliths that use translucent quarts rocks as shelter from the extreme heat, cold and UV radiation present in the earth’s hyper arid deserts. Hypoliths are able to live under these rocks because they offer protection, yet allow for the penetration of sunlight needed for photosynthesis. In these environments, this may represent the only energy input into soils.
Dr Makhalanyane is a finalist in this year’s National Science and Technology Forum (NSTF)-BHP Billiton Awards. The winners will be announced this week. His research focuses on understanding the ecology of hypoliths. In other words, he looks at how they survive and how they interact with the environment and the earth’s biological cycles.
Last year, he traveled to Antarctica to collect samples of these communities, which are indicators and excellent models for understanding a number of crucial ecological questions, such as how environmental extremes shape microbial structure.
“Previously we only had DNA evidence that these microbes exist, but following our sampling expedition we extracted protein from hypoliths and soils. Due to the absence of plants and higher organisms, we believe that the proteins could only have been produced in the microbes. This means these microbial communities are active and our data shows direct evidence for carbon and nitrogen fixation in these systems, and not just genetic capacity,” says Dr Makhalanyane.
Nitrogen fixation is the process in which nitrogen in the atmosphere is converted into ammonium or nitrogen dioxide. This process is essential for all forms of life because nitrogen is required for the basic building blocks of plants, animals and microorganisms. Similarly, carbon fixation refers to the conversion of carbon dioxide in the atmosphere to organic compounds by living organisms, primarily through photosynthesis.
Microorganisms are key mediators in both cycles, and losses in microbial diversity may have direct implications globally. Some studies have suggested that losses in microbial diversity may have consequences for the productivity of agricultural soils, but this remains unclear.
Research using model systems such as hypoliths from extreme environments may help to better understand the relationship between biodiversity and ecosystem functioning.
“We are looking at drawing bigger conclusions about how the rising temperatures associated with climate change might affect the behaviour of hypoliths and what, in turn, the effects on the environment might be,” says Dr Makhalanyane. His team is recreating these effects in laboratory conditions by simulating temperature increases.
“Although preliminary, the results show that temperature increases cause the hypoliths to release more methane. The fact that temperature increases can alter the behaviour of hypoliths could have huge implications because these organisms are the only source of nitrogen fixation present in the Antarctic Dry Valleys. This means anything that disturbs the hypoliths and their ability to take part in nitrogen and carbon fixation could have an impact on the entire region.”
The research team is currently conducting similar studies and simulations on the hypoliths of the Namib desert.
Makhalanyane, who serves as a Young Ambassador for the International Society for Microbial Ecology (ISME), was recently chosen as a finalist in the National Science and Technology Forum (NSTF)-BHP Billiton Awards for his work as an emerging researcher.
- Author Department of University Relations
Share this page
Published by Ansa Heyl 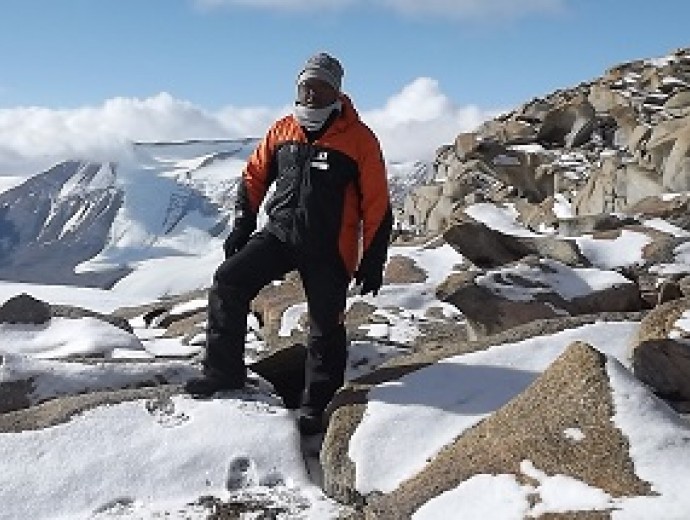