With heavy hearts staff and students from the Faculty of Law at the University of Pretoria (UP) bid farewell to Dr Tshepo Madlingozi, Senior Lecturer in the Department of Jurisprudence, at the end of May 2019.  This follows on Dr Madlingozi’s resignation after 16 years at UP to take up the directorship at the Centre for Applied Legal Studies (CALS) at the University of the Witwatersrand from June 2019.

Dr Madlingozi, who holds the degrees LLB LLM MSocSci from the University of Pretoria and a PhD from Birbeck University of London, is a renowned critical analyst and activist with a passion for rectification, transformation and decolonialisation.

Dean André Boraine and Professor Justice Johann van der Westhuizen, Head of the Department of Jurisprudence, wished Tshepo the very best with his new career and described how he will be missed in many ways, but in particular as a great alumnus and lecturer at UP.  They both expressed an invitation to stay in touch, and that they were hoping to see and interact with him at upcoming legal forums. Well-wishes were also expressed by Professor Frans Viljoen, Director of the Centre for Human Rights and Professor Christof Heyns, Professor of Human Rights Law, Director of the Institute for International and Comparative Law in Africa and a member of the United Nations Human Rights. Dr Madlingozi has been actively working to effect social change and justice and has served as the national advocacy co-ordinator and a board member of the Khulumani Support Group, which represents over 85,000 victims and survivors of apartheid-era gross human rights violations.

In addition to his work at Khulumani, Dr Madlingozi has served on the boards of various human rights and social justice organisations, including the Centre for Human Rights, University of Free State; the Socio-Economic Rights Institute of South Africa; Zimbabwe Exiles Forum; and the Council for the Advancement of the South African Constitution and amandla.mobi. He has also been a consultant to the Office of the United Nations High Commissioner for Human Rights and the Pan-African Parliament.  He has served on Project 25 of the Advisory Committee of the South African Law Commission, scrutinising the legislation administered by the Department of Provincial and Local Government to identify redundant provisions and determining compliance with Section 9 (‘the equality clause’) of the Constitution.

The Faculty of Law and its staff and students wish Dr Madlingozi the very best in his new career. Farewell Tribute to Dr Tshepo Madlingozi by Dr Joel Modiri in the Department of Jurisprudence, Faculty of Law:

It is with a heavy heart that the Department of Jurisprudence in the Faculty of Law of the University of Pretoria wishes Dr Tshepo Madlingozi farewell after 16 years of service at the University of Pretoria.  Dr Madlingozi will be relocating to Johannesburg to join the School of Law at the University of the Witwatersrand as Associate Professor of Law and Director of the Centre for Applied Legal Studies, one of South Africa’s leading human rights and civil society organisations.  Dr Madlingozi’s appointment to the directorship of CALS will enable him to combine both his academic research and activist engagements.

Dr Madlingozi is recognised locally and internationally as one of South Africa’s leading critical voices in the legal academy.  His academic career is deeply embedded in socially, morally and politically-engaged struggles for social justice, reparations and democracy from below.  Throughout his work, Dr Madlingozi insists that the struggles, perspectives and experiences of communities and social movements should be taken seriously by academics and incorporated into legal research.  To be critical, for him, is not an abstract intellectual exercise but also encompasses political action and community engagement. Tshepo is also a well-established figure in the human rights and advocacy community, having served as Chairperson and National Advocacy Co-ordinator of the Khulumani Support Group, a founding board member of the Socio-Economic Rights Institute SA (SERI-SA),  a board member of Amandla.mobi and a member of the Council for the Advancement of the South African Constitution (CASAC).

He has authored many influential papers on social movements, legal mobilisation, transitional justice, historical justice and decolonisation.  In his recent work on decolonising constitutional visions, he draws on a number of thinkers and activist-intellectuals in the African nationalist tradition to develop a pathbreaking critique of post-1994 legal discourse.

Dr Madlingozi is also one of TuksLaw’s most brilliant teachers, having been awarded the lecturer of the year award multiple times in his career.  His pedagogical style centres robust debate and critical thinking.  Many current academics and legal practitioners have passed through Dr Madlingozi’s hands and many cite him as a key inspiration for pursuing academia and human rights litigation and practice.  As an academic citizen, Tshepo also played a key roles in the Faculty during his tenure as co-chairperson of the Transformation Committee (2004 to 2005), a member of the Management Committee of the Pretoria University Law Press (PULP), Editor of the African Human Rights Law Journal and member of the Research and LLB committees.

One cannot think of anyone more suited to play such a key leadership role in the continuing struggles for human rights, social justice and transformation than Dr Madlingozi.  We have benefitted immensely from his wisdom, generosity and critical insights and wish him only the best as Director of CALS.  His departure nonetheless leaves us with the challenge he posed many years ago when he wrote: that “legal academics can help energise the fight against neoliberalism by helping to transform those human conditions and power relations that have reproduce social misery and subjugation. This is better than just proclaiming very glibly and with nose up in the air at international conferences, that ours is a truly ‘transformative constitution’.” 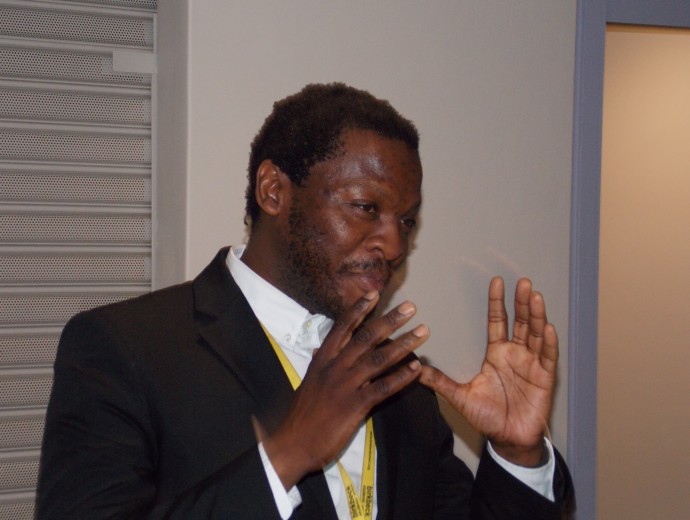