The Department of Historical and Heritage Studies (DHHS) in the Faculty of Humanities hosted a Design Sprint as part of the ongoing Erasmus plus SUCSESS Project from 2 – 12 September 2022 for its Heritage and Cultural Tourism (HCT) Honours students.

A Design Sprint is a method that companies such as Google have pionered to conceptualise, develop, prototype and test a product in one week.

The students were tasked with designing a souvenir for the University of Pretoria (UP) Museums as their clients. The fifteen students were randomly divided into three groups and had to work together to make it as winners of the Design Sprint competition.

The group called "The Sprinters", comprising of Joslinah Mkhatshwa, Thabang Mamburu, Gert Nel, Angela Clarke and Mavis Cossa won the Design Sprint competition with their UP Museums Memory Box, an interchangeable and customizable lightbox with lithograph panels of various artworks in the University of Pretoria Museums collection.

On the Friday preceding the sprint, the students were briefed by the client, Mr Matsobane Steven Motena, Interpretive Officer at the UP Museums. The UP Library's Makerspace showcased 3-D designing software to facilitate the creative process. The students worked together in their groups, coming up with ideas and delegating tasks amongst themselves equally to expose their hidden talents.

On Monday, the official first day of the "Sprint", the students presented ideas to Makerspace, but they were turned down because they were too big for the limited prototyping budget. This did not break their spirits. Instead, they were more determined to explore their creativity.

A second visit to the UP Museum gave “The Sprinters” an idea, when Joslinah saw the "Tree of Life" by Abraham Makhabela in the Eduardo Villa Museum.

To commemorate 100 years of UP Museum's collecting, “The Sprinters” looked for the first item the museum had received, which was the linocut of Paul Kruger by Jacob Hendrik Pierneef, donated by the artist in 1922.

By Tuesday late afternoon, the design was sent to the Makerspace for 3-D printing. By Thursday, the "UP Museum Memory Box" was ready to be seen by the world.

After winning, "The Sprinters" had a chance to reflect on the week as a group. They were forced to narrow down their ideas due to budget constraints. As a Design Sprint, they had to  learn to work within a very tight time frame.

“The biggest lessons we learnt were teamwork, communication, listening to understand and having fun under pressure. This competition came at the right time because it has prepared us for the unknown in the world of work.”

"The Sprinters" are ready to sprint some more! 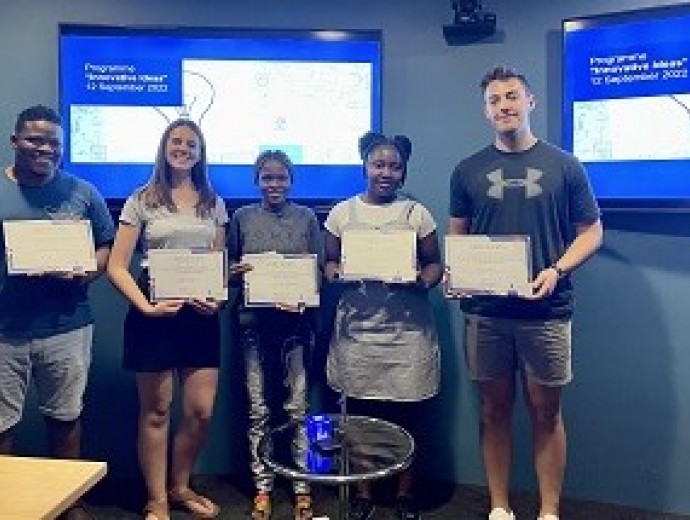 The winning team: "The Sprinters"