Ideas around cross-border tourism, indigenous storytelling, and film tourism were the focus of a keynote address delivered at the recent World Federation of Tourist Guides Association (WFTGA) Convention by Professor Karen Harris, Head of the University of Pretoria’s Department of Historical and Heritage Studies.

The WFTGA was established in 1985 and represents over 70 countries, with a membership of over 200 000 tourist guides worldwide. The association’s eighteenth convention was held in Tbilisi, Georgia with the theme “World’s Historical Crossroads”. The convention aims to raise the profile of professional tourist guides through hosting international guest speakers and workshops.

Prof Harris, who is also Director of the UP Archives, presented a paper titled "Building Bridges, Breaking Barriers: The Tourist Guide as Innovator", which highlighted the research, legislative, creative and resourceful nature of heritage and cultural tourist guides, with examples drawn from southern Africa.

Her address focused particularly on the growing niche markets of Cross-Border Tourism, in which a destination is marketed as trans-border or regional, as opposed to national or geographically bound; Indigenous Storytelling, in which the voices of local communities and individuals are incorporated and made integral to the tourist offering; and Film Tourism, in which the multiplier effect of this mass medium is capitalised on to attract visitors to a destination.

She said much of the research she presented on was drawn from the work that the Department of Historical and Heritage Studies has conducted for the national Department of Tourism over the past seven years. Under her leadership this research is undertaken by Heritage and Cultural Tourism postgraduate students who are also awarded bursaries from the funding received. The research team includes Charlene Herselman, Richard Wyllie, Alida Green, Jane Dewah, Hannes Engelbrecht, CR Botha, Sian Pretorius and Tiffaney Morolong. The Memorandum of Understanding with the national Department of Tourism has again been renewed for 2019-2020.

UP’s Department of Historical and Heritage Studies has been offering both undergraduate and postgraduate degrees in Heritage and Cultural Tourism for the past two decades. “These programmes open up a whole range of entrepreneurial opportunities to graduates in both the public and private sector,” she says.

Her keynote address resulted in invitations to address and assist with the development of programmes in Heritage and Cultural Tourism at other international tertiary institutions. She pointed out that tourism is currently one of the world’s fastest-growing industries, and quoted Tourism Minister Derek Hanekom, who said that, “Tourist guides are absolutely critical to the continuing success and growth of tourism in any country.” 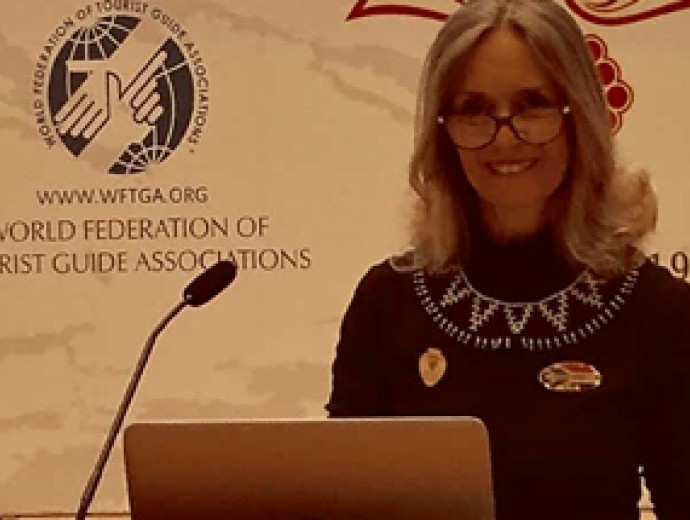