The first year History students enrolled for the module GES 120 in the Department of Historical and Heritage Studies met the highly acclaimed international academic Prof Robert Ross, Emeritus Professor at the Institute for History at Leiden University. The students use one of the books he wrote on Cape slavery, Cape of Torments, as well articles that he has written on the subject for their research. His Concise History of South Africa is also one of their prescribed sources. According to their lecturer Professor Karen Harris, Professor Ross is acclaimed as “one of the leading historians on early Cape history and is renowned for ‘the meticulousness of his archival research and the expressive clarity of his prose’”.

Prof Ross spoke briefly about the horrors of slavery and how extreme the treatment and punishments of slaves were. He described in detail how slaves were punished by being impaled or broken on the wheel for rape and murder. He also spoke of the dismal position of female slaves who had no rights over their own bodies and how they were sexually abused by their masters. He explained to the students how he used the Cape colonial court records as his primary sources in order to give voice to these enslaved people. He also described that when writing the book on Cape slavery he was filled with much “anger” at what had transpired. Students asked questions and some were fortunate enough to have him autograph their prescribed texts.

The first year students enrolled for Heritage and Cultural tourism (EFK 120) in the Department of Historical and Heritage Studies were also addressed by a contingent of representatives from the South African Heritage Resource Agency (SAHRA) and the National Heritage Council (NHC ). Former postgraduate student from the Department, who is currently enrolled for a Masters , Ms Kim Ngobeni of SAHARA, spoke to the students about the cultural heritage sector and what it meant in the broader South African economy. She also shared with them the possible career opportunities in heritage and culture. This forms part of the course taught by Mr Hannes Engelbrecht. 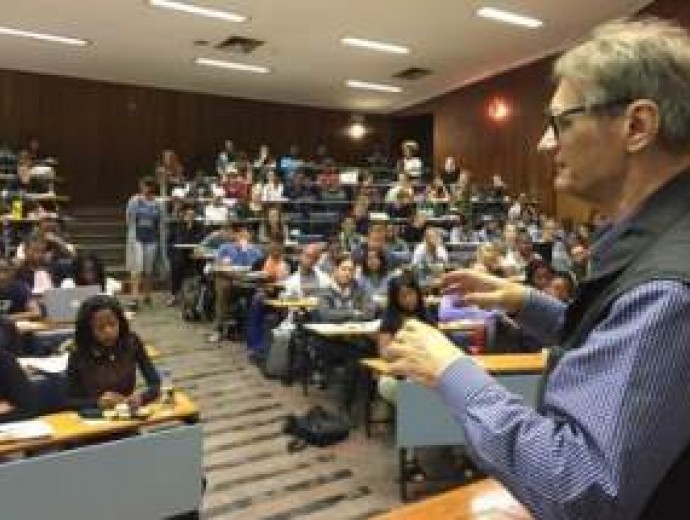