Minister of Higher Education and Training Dr Naledi Pandor took her portfolio seriously by going back to class and graduating with a PhD in Education from the University of Pretoria (UP) this week.

Her research topic was ‘The contested meaning of transformation in higher education in post- apartheid South Africa’.

The minister, who holds a Master’s in Education policy and practice in multi-racial societies, and another in Linguistics from the applied linguistics perspective, said she chose UP to further her studies as “I was told that the Education Faculty at UP was a really good team with very powerful postgraduate support. I knew that given my schedule I should be registered at an institution with a good PhD programme. Several friends referred me to UP.”

She chose education “because it is the discipline I have always had an interest in understanding further. I am a teacher by early training and am fascinated by education. I learnt that there is a vast amount of absolutely fascinating education information that we need to tap into much more than we do today. I also learnt how to use research material and to carry out a very demanding academic schedule.”

Being a student and a cabinet minister was demanding, and she said she had to plan her work and study schedule carefully, and sacrificed many things she enjoyed, including time with her family. Her sleep was also affected. “Every moment outside work and politics was given to my studies. I tried to balance but some areas were neglected, especially family. I made every effort not to negatively impact on my work schedule, but I did accept fewer invitations for three years of the four,” she said.

Minister Pandor says the decision to study again was nerve-wracking. “But I knew I had to try. I was nervous and slightly embarrassed, as I am an older student, but once I started, I did not want to stop. There were several really bright young students and they seemed so confident and relaxed; I sometimes felt I could not catch up to their confidence levels, but I wanted to do this, so I persevered.”

Minister of Higher Education and Training Dr Naledi Pandor is capped by UP Vice-Chancellor and Principal, Prof Tawana Kupe during her graduation ceremony this week.

Professor Chika Sehoole, Dean of the Faculty of Education at UP, says it was an honour to supervise the minister. He previously worked with her before the old Department of Education was split. “After I agreed to supervise her, she set the rules for the relationship. She said to me, ‘Now you are my Professor, I am your student. You call me Naledi, and I will call you Professor.’ That was a shocker! I could not believe it, especially given our previous relationship in the Department of Education.”

He said being her doctoral supervisor was not easy, especially in the early days of this relationship, as he had “to call her by her name. I even sought the advice of her personal adviser, who encouraged me to stay the course, and that I will warm up to it”.

According to Prof Sehoole, Minister Pandor was a good student. “She was the kind of student every supervisor would like to work with. She worked very hard and did not want to submit substandard or mediocre work.”

Not only did she attend classes, but she also came in person to register or renew her registration for her studies at the beginning of every year. Minister Pandor was a regular face that was often seen around the Administration building around that time. “She came to defend her proposal, queuing with other students outside the room, waiting for her turn. She managed to defend her proposal in the first year of her studies, which was a remarkable achievement, given her tight schedule,” he said. Minister Pandor returned Prof Sehoole’s praise: “I had an excellent supervisor who built a positive relationship with me, knew when to advise or support, when to apply pressure, and when to leave me to my own devices. Even though there were one or so meetings where I felt weepy, the whole time with my supervisor was inspiring, and his belief that I could do it was a great motivation.”

UP Vice-Chancellor and Principal Professor Tawana Kupe said: “We are delighted that the Minister chose UP. In the 2019 QS World University Rankings by Subject Report, UP’s Faculty of Education was placed in the 201 – 250 range of top universities worldwide. Minister Pandor is living proof of the government’s concept of continuous, lifelong learning. We encourage our students and alumni to become lifelong learners.”

Prof Kupe said UP, which engages in trans-disciplinary and multi-disciplinary research, creates world-class research that matters. “UP is one of the biggest producers of PhDs in the country, and is therefore a major knowledge producer.”

The work the minister produced received acclaim from international examiners. Professor Fazal Rizvi from the University of Melbourne, Australia, said the following about the thesis: “I would … like to congratulate Mrs Pandor on producing a most insightful thesis which I enjoyed reading very much, not least because it led me to obtain a more nuanced understanding of South African higher education and consider theoretical issues that I have not previously encountered. I have no doubt once the thesis is passed and deposited it will be widely consulted and cited.”

Minister Pandor said, “I am a firm advocate of continuous learning. We should all try to pursue our dreams and learn as much as we can. We need to encourage our institutions to be aware of the diversity of persons who may wish to resume their education or attempt new professional studies. I don’t see enough attempts at significant drawing in of adults to continuous learning.”

She said she aims to “rest for a bit, and then think about how to pursue some new ideas that emerged from my research”. 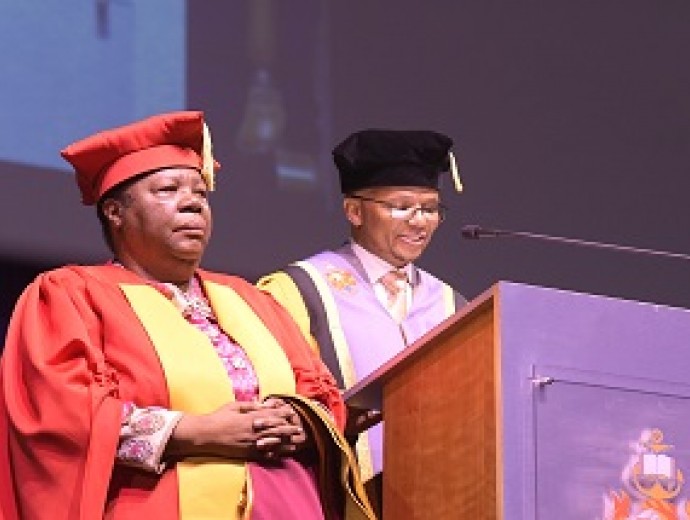