Ms Anienie Veldsman from the Department of Early Childhood Education at the University of Pretoria (UP) has received a sponsorship from Care for Education, a non-profit organisation that strives to uplift disadvantaged communities, for the development of a programme aimed at strengthening young learners' perceptual-motor skills.

During a meeting with the Lego Foundation, which was held at UP, Ms Veldsman met representatives of Care for Education and informed them about her research in the Pretoria suburbs Daspoort and Mountain View. She was subsequently offered a sponsorship, which will benefit three Grade R and RR teachers from three schools in Mountain View and Daspoort, and 550 children.

Although initially Ms Veldsman planned to involve only Grade R teachers as participants in her research, the schools requested that she include Grade RR teachers as they realised how important the research would be for the professional development of teachers and the development of learners' skills. Workshops were subsequently held over a period of eight weeks. Lego products were used in these activities.

Inadequate literacy skills is a global problem, and South Africa is no exception. The results of the 2011 Annual National Assessment (ANA) showed that, compared to what is expected, Grade 3 learners' average literacy and numeracy levels are at 35% and 34% respectively. Recent results show that minimal improvement has taken place since the year 2000. The Minister of Basic Education acknowledged that this was unacceptably low. The poor performance of Grade 3 learners proves that there are serious shortcomings in early childhood development programmes and findings show that the average skills levels of young children remain very weak.

The Department of Basic Education (DoBE), together with several researchers, emphasise that learners should not be exposed to formal literacy too early, but should develop a strong foundation of perceptual and perceptual-motor skills before they are exposed to formal learning. However, despite the recommendations of the DoBE, several schools in Gauteng do start formal training in literacy in Grade R. It is within this frame of reference that Ms Veldsman started creating a professional development programme for Grade R educators. The programme will aim to empower teachers through professional development, using a play-based approach, to strengthen Grade R learners' perceptual-motor skills. Research worldwide emphasises the importance of a good foundation of perceptual-motor skills before learners are exposed to formal literacy. The programme will focus, among other things, on the importance of balance, laterality, midline crossing, coordination and vestibular integration for literacy acquisition.

An article on the sponsorship and the work done in collaboration with the Lego Foundation was published by Maroela Media and was shared 6 000 times in three days. Approximately 1 000 people commented on the article and the research. Ms Veldsman received more than 20 emails about her research from all over the world. It appears that nationally and internationally practically no research has yet been reported on that focused on the importance of the development of Grade R learners' perceptual-motor skills by way of a play-based curriculum focusing on the professional development of teachers. 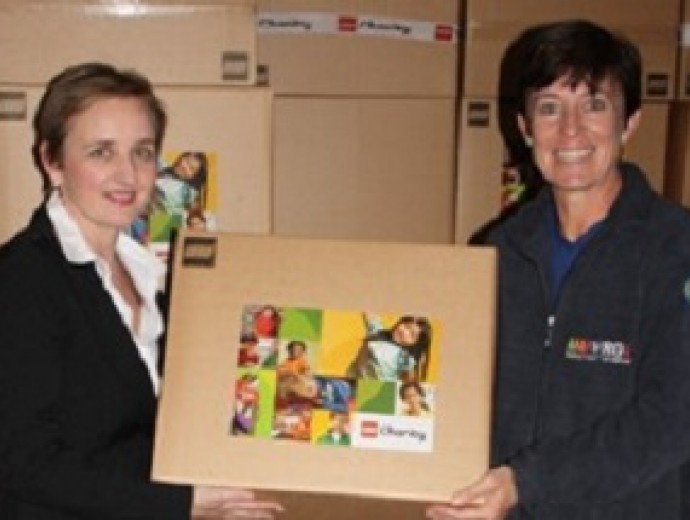 Ms Anienie Veldsman with a representative from Care for Education