Prof Ronél Ferreira, Head of the Department of Educational Psychology in the Faculty of Education at the University of Pretoria (UP), uses intervention research to facilitate positive change in resource-constrained school settings and vulnerable communities. This style of research not only involves people at ground level as active participants, but also empowers them to become partners of change who eventually drive the process of change themselves. The way in which Prof Ferreira applies participatory intervention research sensitises participants to their strengths and available resources, and allows them to identify the challenges they experience in their particular setting. Once established, a process is facilitated whereby the participants think of creative ways to use their strengths and resources to address and overcome the identified challenges. One of the great benefits of this style of research is that it leads to social change and upliftment, which can be sustained if participants take ownership and drive their supportive initiatives.

Having worked in the field of educational psychology since 2003, Prof Ferreira has used this style of research in all her projects, the first of which involved teachers in the Eastern Cape and focussed on the way in which schools (teachers) could support communities in coping with the effects of HIV and AIDS by relying on available resources in the school-community setting. After identifying existing challenges in the community, she assisted teacher participants to find ways of addressing these challenges by initiating school-based support projects including growing a vegetable garden, the establishment of an HIV and AIDS information centre at a school and a support team for vulnerable community members. Parent evenings were held to inform parents about HIV and AIDS and offer support by means of home visits. Prof Ferreira reflects proudly on how, after many field visits, a new and successful project had been initiated by the teachers. 'It is a great realisation among the participants that they have the power within themselves to make a difference,' she says. Subsequent to the initial participatory process and successful support projects, this group of teachers became leaders in the community.

In view of the success of this intervention, Prof Ferreira (in collaboration with co-researcher Prof Liesel Ebersöhn) took it to other parts of the country, eventually involving 74 teachers in 11 schools in the Eastern Cape, Mpumalanga and Gauteng. The project was named the Supportive Teachers, Assets and Resilience (STAR) project, and within it the particular style of research allows participants to guide the process in the direction it needs to go. As STAR progressed, teacher participants realised that in order for the research and their work to grow to the heights they hoped for, the study would have to involve other key role-players in the community, such as community volunteers. This saw the birth of the Supporting Home Environments in Beating Adversity (SHEBA) project. For this follow-up project, volunteers participated in an adapted version of the STAR intervention, facilitating a process whereby they could support the schools, teachers and communities where they work. Several school-community support projects were initiated as a result of the SHEBA intervention, such as fundraising projects that benefited teachers, parents and children, after-school care and homework projects, parent skills training groups, and teacher and classroom support initiatives.

Based on the findings of the STAR and SHEBA projects, the need for a focus on the value of school-based vegetable gardens in vulnerable school-community settings arose. As a result, Prof Ferreira, in collaboration with Prof Ebersöhn, Mrs Karien Botha and Prof William Fraser, are conducting a follow-up study on vegetable gardens and how these may support the resilience of vulnerable communities. Following a colloquium held in March 2016 involving teachers from eight schools and representatives from the National departments of Basic Education and Agriculture, as well as NGOs, preliminary findings indicate that vegetable gardens have a positive effect. One of the participating schools have for example started selling produce from the school-based garden to the wider community, in order to raise funds in support of vulnerable children and their families, and the functioning of the school. Some schools involve parents and volunteers in their vegetable garden projects, creating the possibility of income generation for them. In addition to fundraising initiatives, the school-based vegetable gardens also provide additional nutrition to supplement existing feeding programmes and soup kitchens of the participating schools. In addition to the team of UP researchers involved in these projects, many postgraduate students have graduated from these participatory intervention studies and gained valuable expertise as researchers. 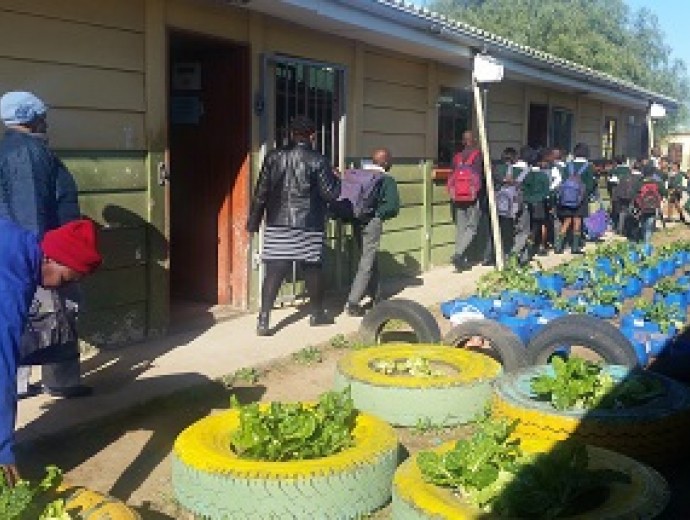 One of the participating schools' vegetable garden project