Darren Neethling, an MEd student in UP’s Faculty of Education, was behind the steering wheel in the biannual Sasol Solar Challenge that took place over eight days until 4 October 2014. As IT and Graphic Design teacher and Mobile Learning Coordinator for Maragon Private School Olympus in Pretoria, Darren helped the Solar Eagles – the only high-school team participating – to end sixth out of 10 contenders.

The Sasol Solar Challenge is an endurance race that pushes the boundaries of solar technology. The technology used during the challenge could one day be incorporated into solar- powered vehicles that will be our everyday transport. The team that won the race overall was the Nuon solar team from the Netherlands, with a vehicle worth about €20 million.

This year’s challenge started on 27 September in Pretoria and drew to a close 8 days later in Cape Town, taking teams on a route of 2 000 km through Kroonstad, Bloemfontein, Colesberg, Graaff-Reinet, Port Elizabeth, Knysna and Swellendam along the way, covering approximately 260 km a day.

Participating teams came from Turkey, Northern Cyprus, the Netherlands, Potchefstroom, Pretoria, Cape Town, Johannesburg and KwaZulu-Natal. Maragon Private School Olympus was a unique team, as the members (the students) joined the programme with no engineering or business background. The result of a project started by the school in November 2013, the Solar Eagles, gave Maragon students the opportunity to gain valuable hands-on engineering and business experience, while raising community awareness of clean energy vehicles and aligning education with science and technology.

The team used the North-West University’s 2012 solar car to which they have made adjustments to be able to take part and be competitive in this year’s challenge. With this car, the team palmed in five awards, including the best rookie award, the longest distance covered by a school in one day, the longest distance covered by a school overall, the environmental award and the winners of the high-school category.

According to Darren, it all came down to race strategy and preparation, as well as luck of the draw weather-wise. “Our electric vehicles didn’t quite like the rain for obvious reasons,” he noted.

He added that it was a privilege to drive for the Maragon Solar Eagles. “What made it even more worthwhile was seeing their faces at the awards ceremony. Our project was student-driven with only two engineers as mentors for them. They worked hard and reaped the rewards. I am extremely proud of them.” 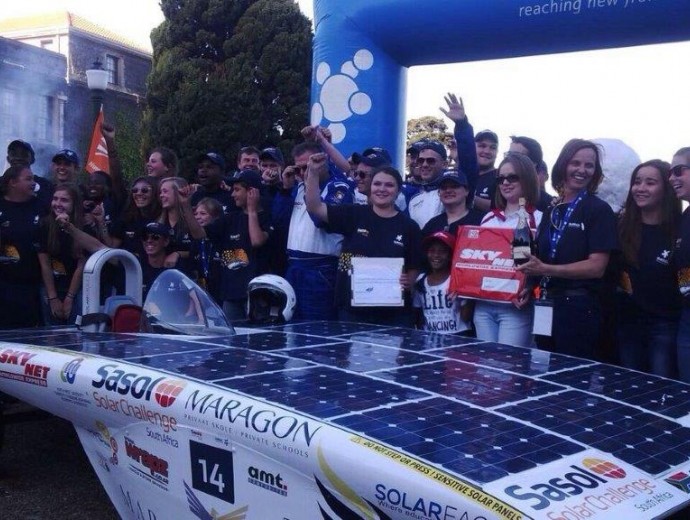