One of the highlights of the graduation ceremony in the Faculty of Education will be conferring of the degree of Doctor of Philosophy on honourable Naledi Pandor, Minister Higher Education and Training. Minister Pandor first registered for her PhD in January 2015, and her research topic was “The contested meaning of transformation in higher education in post apartheid South Africa.”

The study investigated the ongoing and persistent concern with transformation, and the various meanings intended by users of the concept, when used with regard to higher education in post-apartheid South Africa. The study found that since 1994 there have been a range of initiatives by the new democratic government directed at reversing the legacies of apartheid higher education. Despite the stated intentions of these attempts, there continue to be constant arguments, demands and critiques which assert that the intention of achieving transformation in higher education is not being realised.

One of the external examiners, Professor Fazal Rizvi (from the University of Melbourne in Australia) commented that the thesis makes an original contribution to the scholarly literature --in addressing a question that is central to the development of the South African higher education system: how to understand the contested meanings of transformation, and how to work across these meanings to develop a more coherent sense of the ways in which higher education might help to democratize South African society.

She completed her degree within a record time of four years. According to her supervisor, Professor Chika Sehoole, who is also the Dean of the Faculty of Education, “Honourable Pandor was a model student every supervisor would like to work with.” She was diligent, hard working and often delivered on the agreed assignments and tasks on time, despite her busy schedule as a Minister of Higher Education and Training, Cabinet member, and a member of the Executive Committee and Working Group Committee of the ruling Party. The degree will be conferred at a graduation ceremony on the 16 April. 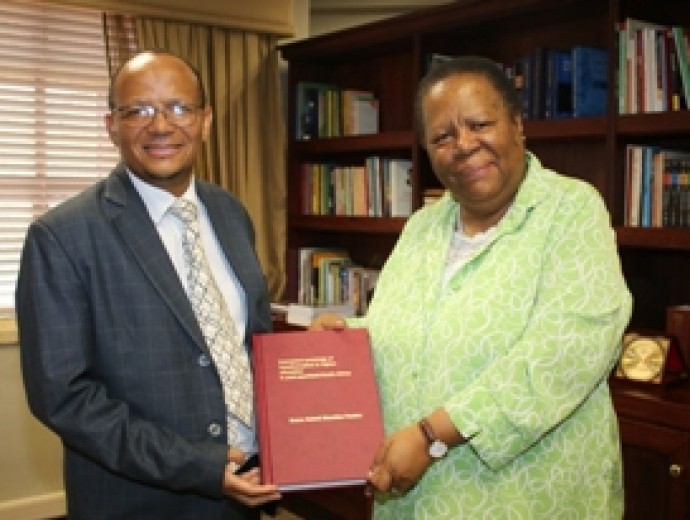 Professor Chika Sehoole, Dean of the Faculty of Education and the Minister of Higher Education and Training Honorable Naledi Pandor