Delron Buckley's visit to UP

The University of Pretoria (UP) recently hosted former Bafana Bafana and German Bundesliga legend, Delron Buckley. He spoke to coaches and youngsters from the Tuks Football Academy at the Merensky 2 Library as part of the Youth Day celebrations on Tuesday, 30 May. Buckley read from his book, My life, of his rise from an unknown teenager growing up in the Durban suburb of Sydenham, to earning a professional contract, at the age of 16, with Bochum FC in the premier German Bundesliga. At only 20 years old, he represented South Africa in Bafana Bafana, achieving 76 caps, and playing in the 1998 and 2002 World Cups and the 2000 Olympic Games.

What makes his story so inspiring is the many challenges he faced and overcame: being raised by his single mother, as his biological father had abandoned him at birth; having to run for his life from gangsters; and overcoming the temptation to abuse drugs and alcohol. These vices were so rampant in his neighbourhood that only two of his twenty friends from that time are alive today. Buckley's salvation was his football talent, which also took him to play for Borussia Dortmund, FC Basel and Arminia Bielefeld. He also received interest from English Premier League clubs, Everton, Hull and Blackburn Rovers. After living in Germany for 18 years, Buckley returned to South Africa in 2012 with his wife and three children. Retired from playing, he is now involved in coaching and young-player development.

Buckley grew up on the same notorious street, Butcher Road, as UP's own Vice-Chancellor and Principal, Prof Cheryl de la Rey. Buckley was full of praise and admiration for her and said, 'Prof De la Rey has done really well to be where she is. She is an inspiration to her students for achieving all that she has despite facing the same challenges I did.'

During his visit to UP, Prof De la Rey met with Buckley and his writer, and said, 'Delron is a good role model for all South Africans, especially the youth of our country. As a young man, against the odds, he left behind his family to successfully pursue his dream in a foreign land, having to learn a new language. Despite all of his difficulties, he rose to become a respected and recognisable figure in world football.'

Buckley's writer, Myan Subrayan, is a UP staff member, and writer and editor of the staff newsletter, Tukkievaria. For more information or to buy a copy of Buckley's book, visit www.DelronB.com. 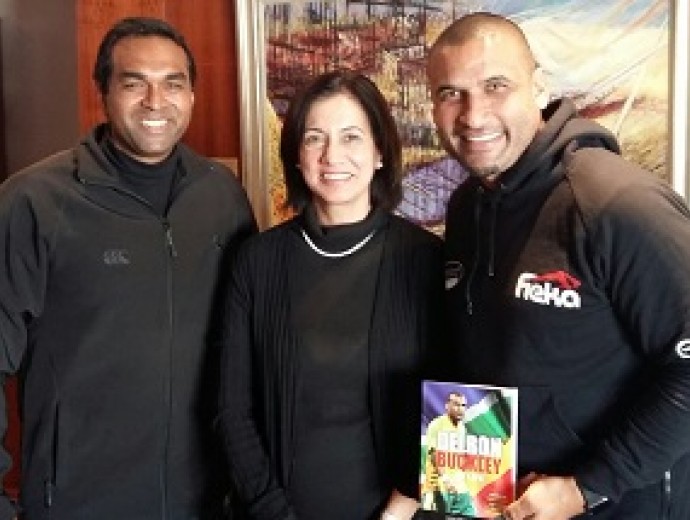