On 17 May 2016, AmaTuks Head Coach Shaun Bartlett shared his story with University of Pretoria students and staff at a Youth Day event organised by the Department of Library Services in the Merensky Library on the University's Hatfield Campus. This is his story:

'My mother gave birth to me when she was very young and as she had to go work, I ended up in my grandmother's care. With fifteen people sharing a three-bedroomed house things were never easy and I had to share the "boys'' room with five uncles. It is an unfortunate reality that we have become a nation in which family situations force kids to grow up quickly. Often it is not by choice, but you just have to make the best of what you have. I had an absent father and although he had numerous opportunities to be there for me, he never turned up. I remember being sent to his house at an early age to ask for money to buy supplies that I needed for school. At the time he was supposed to contribute about R40 monthly towards my maintenance, but he chose not to pay it and my mother had to work three jobs to make sure that I could have what I needed.

'I grew up in a suburb called Factreton, situated between Goodwood and Maitland, in Cape Town. Growing up in a poorer community means that one is always exposed to a lot of negative things and one of my main reasons for participating in sports was to stay away from the drugs and gangs, which have ruined many people's lives and continue to do so.  Football was my way out. There were other boys who were more talented than I was, but who started using drugs and fell by the wayside.

'I tell my players and my own children that they must always play their best, because you never know who is watching. I was playing in a church league when I was spotted by someone who organised trials for me with Cape Town Spurs, which led to my selection for their squad. My most important goal has to be my first goal, scored when I was playing for Cape Town Spurs. From there the floodgates opened and a good career followed. I am also very fortunate to have had a supportive family. However, more important than scoring goals is having personal goals in life. Making a list of what you would like to achieve is good, but the satisfaction you experience when you achieve those goals and ticking them off your list is better that winning any trophy! At the age of 10 I had three goals, which I wrote down on a piece of paper and shared with my grandmother. My goals were to play on TV, to play in the national team and to play in England. Unfortunately she did not live long enough to see me achieve my third goal, but when I eventually did play in England I knew that she was watching from above. The story of how I came to play in England is quite interesting: I was playing in Switzerland and had a good season. Crystal Palaces, who at the time were competing in the First Division, which is similar to our National First Division, made a two million pound offer for me. Then Charlton, who were campaigning for the Premier League, offered me a loan deal. I therefore had to choose between accepting a guaranteed three-year contract and proving my worth by playing for a contract. True to style, I chose the more difficult option of proving myself! It is easy to chase the pay-cheque and not the passion, but I believe that if you pursue your passion, the money will take care of itself.

'I am enthusiastic about introducing the youth to football as it teaches them that no-fear attitude that is also important in real life and enables them to resist following the popular kids and succumbing to peer pressure. Ultimately you should know what your goals are and focus on getting there. There is no shortcut to achieving any goal and no escalator to success. You have to climb those steps one at a time! As a coach, my aim is not only to make better players, but to make better men, and I hope that the lessons I impart will also be useful in their everyday lives.' 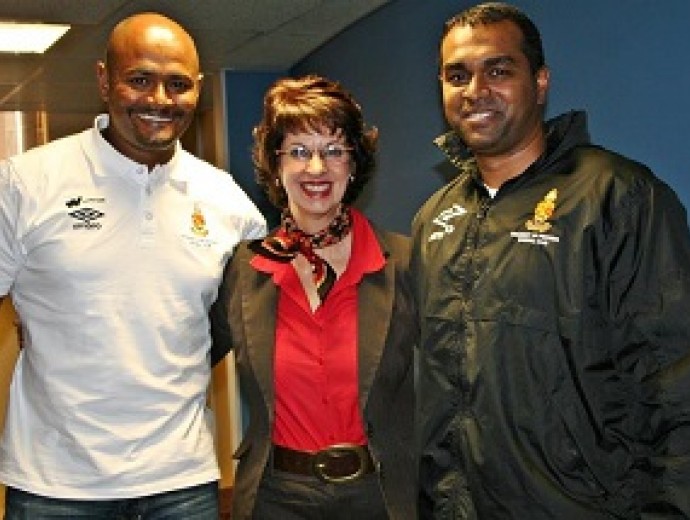