South African Library Week was initiated in 2001 by the Library and Information Association of South Africa (LIASA) with a view to contributing to the general understanding of the important role played by libraries in a democratic society, for instance through advancing literacy, making the basic human right of freedom of access to information a reality, and promoting tolerance and respect among all South Africans. This year, South African Library Week was celebrated from 14 to 21 March and the theme was #libraries4lifelonglearning. According to LIASA, this theme presents a more holistic view by recognising that learning occurs in diverse environments. Lifelong learning is seen as episodic and progressive training within the framework of the formal education system, with well-resourced libraries contributing significantly towards learning of this kind.

To celebrate Library Week, Ms Elsabe Olivier, Assistant Director of the University of Pretoria (UP)’s Department of Library Services, organised a visit to a nearby rural school, Leeuwfontein Primary Farm School, on Tuesday, 15 March, as part of the Marketing and Advocacy Interest Group's outreach project for South African Library Week and World Read Aloud Day 2016. The group included staff members from the Departments of Library Services and University Relations, the Sefako Makgatho Health Sciences University Library, a representative of Dintle Community Awakening and representatives of Sabinet.

Staff members gave the learners a pleasant surprise when they read aloud to them from books written in their own vernacular. This was done to emphasise the importance of reading. ’We are going to change lives today, colleagues,’ Ms Olivier had announced as the staff approached the school, and that is exactly what happened during their brief interaction with the learners.

Sabinet, one of the software providers for the Department of Library Services, came on board as a sponsor and provided refreshments for all the learners and staff. Ms Cathy Naidoo, Manager of Corporate Communications and Marketing at Sabinet, expressed her appreciation for the opportunity Sabinet had been afforded to partner with UP and for the time the staff had sacrificed, and commented that UP played a ’pivotal role in the improvement of education, which is greatly appreciated’.

The varying levels of education of older generations of South Africans reveal a certain level of historical inequality. Since schooling infrastructure does not necessarily support adult basic education or other informal learning needs, libraries have an opportunity to bridge the gap between a traditional system of formal education and a broader system of learning. According to LIASA, libraries can play a key support role in the drive to improve the education levels of SA citizens as their skilled and innovative librarians are able to adapt the physical library and its resources to suit the needs of its users and can thus contribute to the development of a knowledgeable nation.

Ms Olivier concluded that, seen in the broader perspective, the theme #libraries4lifelonglearning fitted well with South Africa’s National Development Plan 2030, which aims to eliminate poverty and inequality by 2030. 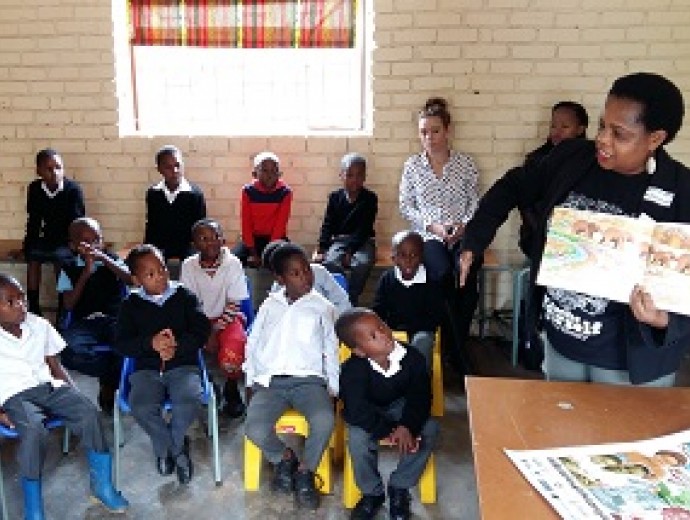