Youth Day commemorated at UP

In celebration of Youth Day, the Department of Library Services invited former University of Pretoria (UP) student Benjamin Mbana, to present a talk at the Merensky 2 Library on 11 June. Mr Mbana graduated with a BComHons (Taxation) in 2012 and was named winner of the South African Ernst & Young (EY) Young Tax Professional of the Year (YTPY) 2014 award. He then won the International EY YTPY 2014 award in Amsterdam in December 2014.

The organiser for this event, Ms Elsabe Olivier, Assistant Director for Marketing and Quality Assurance in the Department of Library Services, said that Youth Day was a reminder of the importance of youth and the role they played in the liberation of South Africa on that fateful day, 16 June 1976.  Her motivation for putting this talk together was to inspire and motivate UP students through the story of one of their own who, despite experiencing setbacks in his life, had achieved success.

Mr Mbana captivated the audience with his talk as he described his humble beginnings growing up in a township in Krugersdorp, where he attained provincial colours as a goalkeeper in hockey at the U/16 age level, earning him a scholarship to the prestigious Hilton College in KwaZulu-Natal. While on the rise, he was diagnosed with a blood vessel complication in his brain that resulted in doctors forbidding him to play hockey. Despite this setback, he persevered and, when he recovered, the doctors allowed him to resume playing hockey. Such was his fortitude that he was chosen in the senior men’s training squad for the 2008 Beijing Olympics. Although he did not make the final 16 to go to China, he did make the 2009 Junior World Cup.

He said: ‘Success was a journey and not a destination. You are a culmination of your decisions. You can’t blame someone else for your circumstances.’

The feedback forms from the youth in attendance were testament to his positive message. Comments included: ‘I am feeling so inspired and motivated to pursue my dreams after hearing his speech’ and ‘It was very insightful and helpful; it actually motivated me to work harder.’

In conclusion Mr Mbana said that you need to be passionate about what you are doing, as this is a common trait in those who are regarded as successful.

The Director of Library Services, Mr Robert Moropa, echoed similar sentiments and said that Benjamin was a remarkable young man who had not wasted his time and energy blaming his parents, teachers, the government, or his background or circumstances. ‘The youth can learn from him to set goals and pursue them with passion, discipline and dedication. South Africa needs young role models like Mr Mbana, who work hard and deliver good results.’

Mr Moropa also expressed his thanks to Ms Olivier and her team for arranging this event. Ms Olivier summed it up well, saying, ‘Listening to Benjamin Mbana, I see a bright and positive future for the youth of South Africa.’ 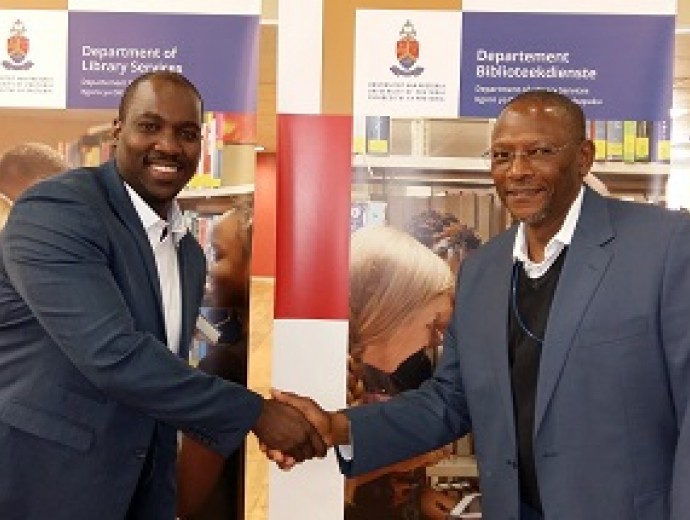