BLOODHOUND SSC on display at UP

The BLOODHOUND SSC Project is a global engineering adventure that uses the possibility of setting a 1 000 mph (1 600 km/h) world land speed record to inspire the next generation to become interested in science, technology, engineering and mathematics.

The BLOODHOUND is a supersonic car (SSC), in other words it is designed to go faster than the speed of sound. It is jet- and rocket-powered and has a slender body, approximately 13,4 m in length, with two front wheels within the body and two rear wheels mounted externally within wheel fairings. It weighs 7,5 tonnes and the engines produce more than 135 000 horsepower, which is more than six times the combined power of all the Formula One cars on a starting grid! The BLOODHOUND SSC represents a mix of car and aircraft technology: the front half consists of a carbon-fibre monocoque, which it has in common with a racing car, and the back half consists of a metallic framework and panels, as seen in aircraft. The car will be under the full control of its driver, Andy Green, who is also a fighter pilot in the Royal Air Force,  when he attempts to set a new world land speed record in the BLOODHOUND SSC later this year.

The BLOODHOUND SSC Project and the awareness around it are quite important to South Africa as the attempt to set a new world land speed record will take place at Hakskeenpan in the Northern Cape. The BLOODHOUND team has the full support of the Northern Cape Provincial Government as well as the Department of Science and Technology (DST), which is funding the educational aspect of this exciting event in South Africa to inspire learners, students and the general public by the science and technology behind this project.

The BLOODHOUND SSC will be on display in the Merensky 2 Library at the University of Pretoria until Wednesday, 29 April 2015. 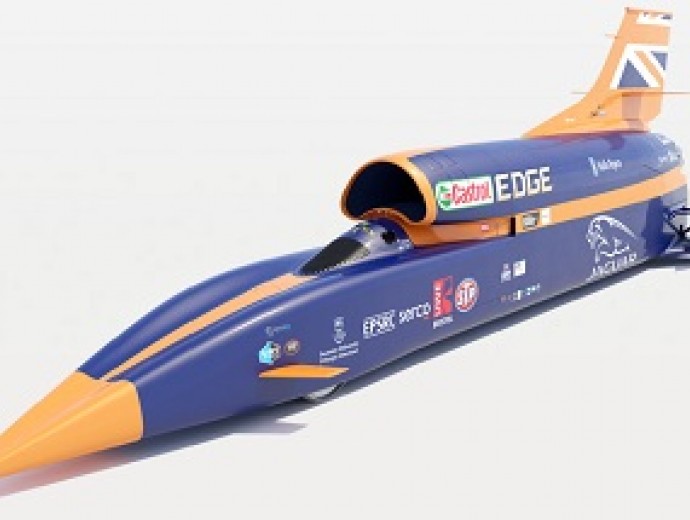