‘DON'T THINK OF IT AS DYING, said Death. JUST THINK OF IT AS LEAVING EARLY TO AVOID THE RUSH.’ Excerpt from Good Omens: The Nice and Accurate Prophecies of Agnes Nutter, Witch (by Terry Pratchett and Neil Gaiman, 1990).

Beloved author and the subject of many academic enquiries, Sir Terry Pratchett, has died.

Pratchett is best known for the Discworld series of 40 comic fantasy novels set in a fictional world which is a flat disc balanced on the backs of four elephants which, in turn, stand on the back of a giant turtle. His work has inspired several University of Pretoria (UP) students to embark on postgraduate studies. The Department of English has in recent years produced one doctoral thesis and three MA dissertations (with another in progress) dealing in whole or in part with Terry Pratchett’s work. Professor Molly Brown, Head of the Department of English, has also published on Pratchett.

The books in the Discworld series satirise and parody, or take inspiration from the works of JRR Tolkien, HP Lovecraft and William Shakespeare, and have sold more than 80 million copies in 37 languages. Some of the stories in the individual books form story arcs within a larger narrative of the Discworld universe.

Part of Pratchett’s signature writing style is the use of footnotes that provide a comic departure from the main narratives. He is also known for anthropomorphising Death, whose speech is represented in capitals to show telepathic communication. Pratchett’s books are rich in intertextuality and his characters and place names often make references to popular culture. His distinctive use of puns and word play are also hallmarks of his writing. Pratchett’s work parodies many aspects of contemporary culture, including newspapers, religion, politics, history, Ingmar Bergman films, other works of fiction, science fiction and fantasy, bureaucracy, stock exchanges and financial systems, trade unions and university politics. Prof Brown says, ‘I believe that Terry Pratchett was the greatest satirist of our time and would mercilessly poke fun at social, political and even literary idiocy.’

His works have been adapted for television, theatre, comic books and graphic novels, music, films and radio, as well as video, role playing and internet games.

After being diagnosed with a rare form of Alzheimer’s disease in 2007, Pratchett continued to write by dictating to an assistant or through speech-assisted software. He did much to raise both awareness of the disease and funds for research on it.

Pratchett was an avid amateur astronomer, and had an asteroid named after him, called 127005 Pratchett. His concern for the future of the environment and humanity prompted him to install and use power from solar energy cells at his home.

He was knighted in 2009 and he famously told The Guardian and The Times Higher Education Supplement that a fantasy writer wants to be a knight, but a knight needs to have a sword, so with the help of his friends, he built a kiln and made a sword out of 80 kg of iron ore which he dug up himself. In 2010, he was granted his own coat of arms and a motto: Noli Timere Messorem (Don't fear the reaper). 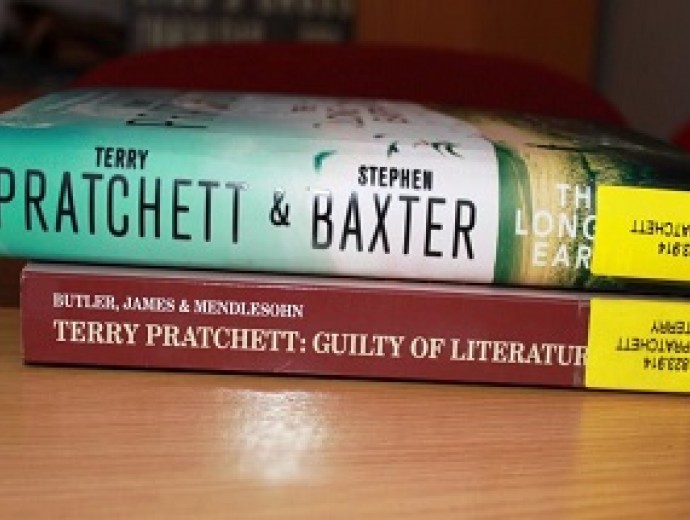