RhODIS® is a system for profiling and indexing rhino DNA, developed by the VGL in collaboration with partners. To date, it has analysed samples from all but one of Africa's rhino range states.

The workshop was funded by the United States Agency for International Development (USAID) through the Wildlife – TRAPS Project and the WWF African Rhino Programme, and was organised by the VGL, TRAFFIC, the WWF and the TRACE Wildlife Forensics Network. It brought together wildlife DNA forensic scientists, enforcement officers and investigators from countries where rhino horn is sourced, transited and consumed. Various branches of the South African Police Service were represented, as was the National Department of Environmental Affairs.

Since the beginning of the upsurge in rhino poaching in Africa in 2008, more than 5 000 rhinos have been poached across the continent. 'The reach of the transnational organised criminals behind the poaching has extended to all major rhino range states, undermining the progress made in rhino conservation over the last two decades. This will pose a serious threat to both of Africa's rhino species if increasing poaching levels cannot be brought under control,' said Dr Richard Emslie from the African Rhino Specialist Group of the International Union for Conservation of Nature (IUCN) Species Survival Commission.

The workshop took scientists and enforcement officers to a rhino crime scene in the Kruger National Park, allowing them to see two poached rhinos whose horns had been savagely hacked off with an axe. With the loss of an average of two rhinos every day, the populations of both species have started to decline in the park.

'This really brought home the reality of the rhino horn trade,' said Dr Jeffrine Rovie, from the National Wildlife Forensic Laboratory in Malaysia, 'and justifies our recent transfer of 14 seized rhino horn samples to the South African Government for DNA testing by RhoDIS in order to aid in enforcement activities.'

Delegates also saw a demonstration of the eRhODIS data collection app, versions of which could be developed in other languages in the future.

Workshop delegates and all African rhino range states support the development and global implementation of a single, standardised and widely compatible forensic system for rhino DNA analysis. According to Dr Cindy Harper, Director of the VGL, a major output of the meeting was that it detailed the requirements of a simplified method to facilitate the roll-out of an improved RhODIS®-compatible system to multiple laboratories across the world. The system could become the international standard for producing DNA profiles that can be analysed and compared in a global database.

'While the RhODIS® system is already a proven tool for the investigation of rhino poaching cases and has been used in a number of prosecutions, the refinement and roll-out of a recognised international standard for forensic analysis of rhino DNA should positively support enforcement action and investigation of trade routes on an international scale', said Dr Harper.

RhODIS® can already be used to determine the species of an African rhino from recovered horn and the meeting recognised the need to develop it further in the hopes that it might also be used to distinguish between the species of Asian rhino.

Dr Joseph Okori, leader of the WWF's African Rhino Programme, noted the critical role played by the global forensic community as a major contributor to combating rhino crime and that DNA analysis is beginning to help improve knowledge regarding trade routes and to inform other aspects of rhino management.

Nick Ahlers, who manages the Wildlife – TRAPS Project for TRAFFIC and the IUCN, said, 'One of the aims of this workshop was to build relationships among scientists from countries that are important in the illegal trade of rhino horns; The positive feedback from those who participated this week indicates that we have achieved this.'

'Rhino poaching not only threatens to wipe out these iconic species, but is also devastating local communities through associated criminality, violence and theft. DNA forensics is a critical tool in the fight against wildlife crime and the outcomes of this workshop are likely to benefit other species involved in the illegal wildlife trade,' said Dr Sara Carlson, a Biodiversity and Natural Resources Specialist at USAID. 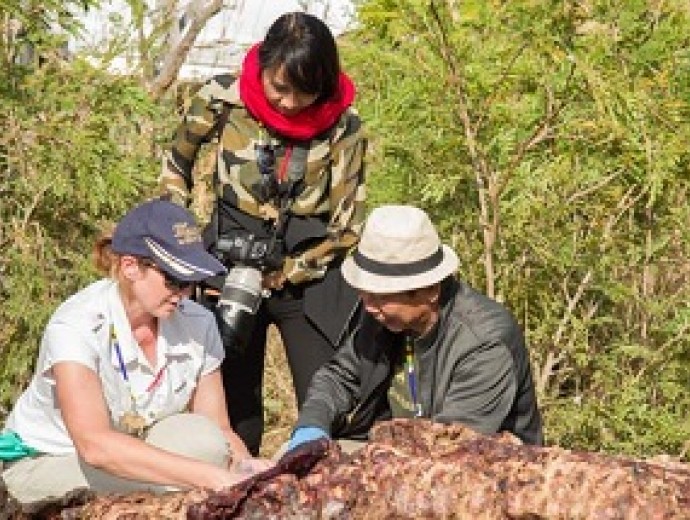