For over a decade it has been known that some drugs are toxic to vultures and that they are exposed to these drugs by consuming contaminated carcasses. Yet no safety-testing measures are mandated for such drugs before they can be approved, nor is there a clear legislative mechanism to ban drugs that are found to be toxic. This is true for South Asian nations as well as the European Union (EU). The biggest concern is that nowhere in the world are pharmaceutical drugs tested for safety also in the wildlife that will be exposed to them. This is true of drugs intended for both human and animal use.

In 2006 Prof Vinny Naidoo – now Deputy Dean: Research and Postgraduate Studies in the Faculty of Veterinary Science at the University of Pretoria (UP) – and his team, started research on protecting vultures from the non-steroidal anti-inflammatory drug (NSAID) diclofenac in cattle, which was responsible for high mortality rates in vulture populations.

It was found that this veterinary drug was the principal cause for the virtual disappearance of formerly abundant Gyps vultures from most parts of the Indian subcontinent. Vultures die from kidney failure when they feed on the carcass of an animal given the drug shortly before death. The population of one species, the Oriental white-backed vulture, has declined to one-thousandth of what it was before diclofenac came into widespread use in the 1990s.

Following the team’s research, veterinary use of diclofenac was banned in India, Nepal and Pakistan in 2006 (and Bangladesh in 2010) in order to protect vultures. However, several other NSAIDs of unknown toxicity to vultures are now sold legally instead. In an article accepted for publication in Conservation Biology in March 2016, a new study by partners of SAVE (Savings Asia’s Vultures from Extinction) shows that cattle rapidly metabolise one of these drugs, aceclofenac, into vulture-killing diclofenac.

With Prof Naidoo as senior author, the SAVE partners, which include the Department of Paraclinical Sciences at UP’s Faculty of Veterinary Science, the Royal Society for the Protection of Birds’ Centre for Conservation Science and the Environmental Research Institute (University of the Highlands and Islands, UK), gave four cattle the recommended veterinary dose of aceclofenac, sampled their blood at intervals and analysed the samples to measure concentrations of aceclofenac and diclofenac. The results were clear: the cattle rapidly metabolised almost 100% of the aceclofenac into diclofenac. A cow treated with aceclofenac therefore poses the same threat to Gyps vultures as one treated with diclofenac. The drug is widely and legally available for treating livestock in South Asia. In fact, it is recommended for the same applications as diclofenac, including palliative care of dying cattle, which leads to the contamination of carcasses that vultures feed on. Of greater concern is the fact that, according to repeated surveys of drugs offered for sale for veterinary use in pharmacies, the availability of aceclofenac is increasing.

Although aceclofenac is not yet as popular as diclofenac once was, the Government of India’s ban on veterinary diclofenac in 2006, and an amendment to that ban in 2015, which is hoped to reduce diclofenac use even further, may result in increases in aceclofenac use, particularly if pharmaceutical companies promote it as a legal and harmless substitute for diclofenac.

At present, vulture populations have stopped declining after a decrease in illegal diclofenac use, but these magnificent birds may now be pushed over the brink by an increase in legal aceclofenac use.

Four years ago, in the Delhi Declaration (Regional Declaration on the Conservation of South Asia’s Critically Endangered Vulture Species: 4 May 2012), the governments of Bangladesh, India, Pakistan and Nepal agreed to prevent veterinary use of aceclofenac in order to protect vultures. However, nothing was done to implement this commitment because, while aceclofenac was known to be metabolised to diclofenac in several mammalian species, it had not been demonstrated in cattle. The study by the SAVE partners now confirms that it does.

The governments of South Asia took strong and swift action against diclofenac in order to save their vultures. According to Prof Naidoo, it is time for them to take equally strong and swift action against aceclofenac. The study suggests that responsible governments should immediately ban all aceclofenac formulations that can be used for treating cattle. Such a ban must be comprehensive, covering the manufacture, importation, retail and use of all but single-dose vials in human health care.

The alternative relaxed approach – as seen in the EU with the recent approval of veterinary diclofenac that now threatens Europe’s vultures – could be the final straw for the endemic vulture species of South Asia.

Click here to read the abstract in Conservation Biology. 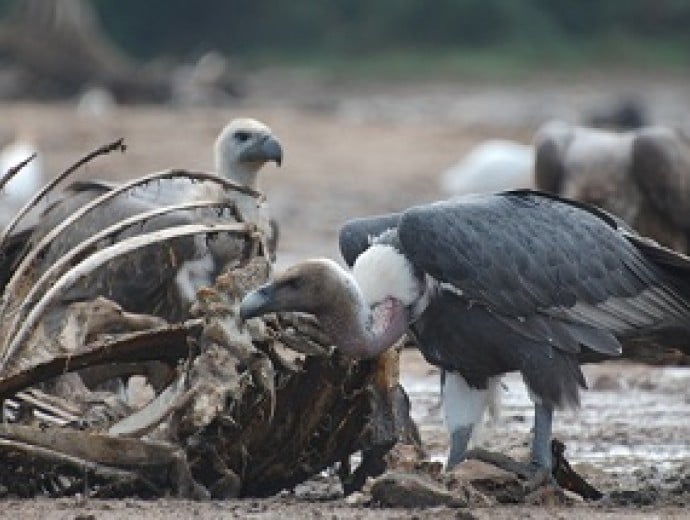 Oriental white-backed vultures that declined by 99.9% in India as a result of widespread diclofenac use in cattle (Photo by V Prakash)