International Performance Indicators in Primary Schools in the Western Cape

The International Performance Indicators in Primary Schools (IPIPS) Baseline Assessment System is a unique international monitoring system which offers research-based data on children’s social and cognitive development as they started school (Grade 1) and on their progress during their first year, providing accurate benchmarks for learning across countries. The project was being implemented in South Africa’s Western Cape Province from 2015 – 2017 as well as in other countries such as China and Russia. The project utilises an assessment that was developed by the Centre for Evaluation and Monitoring (CEM) at the University of Durham in England to monitor learner development. The Nuffield Foundation in England is funding the project and the Centre for Evaluation and Assessment (CEA) at the University of Pretoria is working with CEM to implement the assessments in South Africa.

A random sample of 113 schools and almost 3000 Grade 1 learners in three districts, across three languages, namely Afrikaans, English and IsiXhosa participated in a study entitled “Establishing a Baseline of Children Starting School and Monitoring Progress in the First Year in Primary Schools of the Western Cape, South Africa”. The schools received reports to provide them with feedback of the results of their learners. These results gave an indication of where learners in each school are in terms of their development in relation to the subject areas covered by the assessment.

In the workshop sessions, Professor Howie introduced the study and its survey design and the team. Prof Christine Merrell explained the iPIPS assessment and its origin. Prof Peter Tymms focused on the main research findings and the progress made by Grade 1 learners from Western Cape. Ms Celeste Combrinck presented the interpretation of the reports handed over to principals and teachers supported by Mrs Karen Roux and Mr Gabriel Mokoena who also supported the processes for the workshops. Apart from the workshops, both the CEA and CEM engaged the Western Cape Education Department executive officials as well as the district officials on the contents of the research findings. Both meetings were held at the Western Cape Education offices in Cape Town on the mornings of the 22nd and 23rd of March 2017. 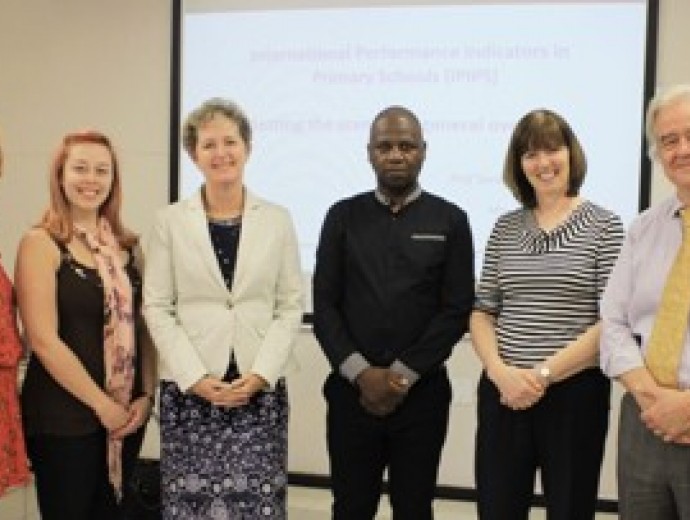