Two highly respected University of Pretoria (UP) academics, Professor Jean M-S Lubuma and Professor James Ogude have been awarded A-2 ratings by the National Research Foundation (NRF), bringing UP’s  total number of scientists in this category to 16.

Prof Lubuma is the former Dean of UP’s Faculty of Natural and Agricultural Sciences, and was head of the Department of Mathematics and Applied Mathematics. Now an Emeritus Professor in this department, he said, “This NRF rating is the acknowledgment of my research that now came full circle.” He attributes the rating to his work on the Nonstandard Finite Difference Method, which he started at the former Vista University’s Mamelodi Campus.

“It was a historically disadvantaged university where conditions to do research were difficult, and only undergraduate programmes were presented in science. This rating reflects some scores on transformation in that something nice could come from Vista. I have much respect for my collaborators and students, and this rating is a recognition of the level of work that we have been doing over the past years.”

This rating is also an acknowledgement of UP’s Department of Mathematics and Applied Mathematics, which is ranked number one in mathematics and computer science in South Africa, according to the CWTS Leiden Rankings.

After completion of his PhD at the Université Catholique de Louvain in Belgium, Prof Lubuma worked on partial differential equations models in physics and engineering. After joining UP in 2000, his research focus shifted to the mathematical modelling of biological processes.

He has published extensively in prestigious journals, contributed to major conferences, and delivered keynote addresses on topics that lie at the intersection of mathematical modelling of real-life situations and a spectrum of mathematical specialisations. Prof Lubuma has received several awards, including the Bulgarian Academy of Sciences Sign of Honour and the South African Mathematical Society Award for Research Distinction, which are the highest conferrable research recognitions of these institutions.

A breakdown of NRF-rated researchers at UP: His research interests include African literature in English and postcolonial theories, with a focus on issues of memory and reconstruction of African history and identities. His focus has shifted to popular culture in Africa, and more recently to postcolonial ecologies in an attempt to show the importance of postcolonial literatures and cultures to global debates on climate change and environmental degradation.

In 2019 Prof Ogude became the second resident scholar from Africa to be appointed Co-Chair of the theme and programme committee of the African Studies Association annual meeting. He was recently appointed to the International Advisory Board of the Consortium for Humanities Centres and Institutes.

Prof Ogude is the author of the highly regarded text Ngugi’s Novels and African History and has published eight edited volumes and an anthology of African stories. He has also published in leading international publishing outlets.

“This recognition has been long coming ever since I received my B rating over a decade ago,” Prof Ogude said. “It is an affirmation of many years of hard work and an excellent record of postgraduate student supervision. I dedicate this recognition to an incredible cohort of former students who have inspired my scholarship. It is a resounding vote of confidence in our research centre, which now boasts two A-rated researchers.”

In related news, researchers Dr Steven Hussey and Professor Thulani Makhalanyane have each been awarded a prestigious P-rating. This rating is assigned to researchers (normally under 35 years of age) who have held a doctorate or equivalent qualification for less than five years at the time of application. P-rated researchers are perceived as likely to become future international leaders in their respective fields.

Dr Hussey is a senior lecturer in UP’s Department of Biochemistry, Genetics and Microbiology and is affiliated with UP’s Forestry and Agricultural Biotechnology Institute (FABI). He has been leading a research group within the Forest Molecular Genetics Programme, studying the transcriptional and epigenetic regulation of wood formation (the molecular mechanisms by which genes, pathways and developmental programmes are dynamically controlled when xylem tissue differentiates).

Being awarded an NRF P-rating has helped him believe in his potential as an internationally leading future researcher. “The award is an indisputable indication to me that my research interests and scientific vision are relevant, influential and respected. Such recognition comes infrequently as a researcher, but it has a way of sparking new ideas, higher ambitions and renewed passion. I am immensely thankful for the mentorship and academic opportunities I’ve enjoyed at the University of Pretoria,” he said.

Prof Makhalanyane, an Associate Professor in UP’s Department of Biochemistry, Genetics and Microbiology, said his interests focus primarily on central questions in the field of microbial ecology, genomics, and biogeochemistry. This research spans multiple systems, including terrestrial and marine environments. His research on hot and cold deserts focuses on using hypolithic and microbial communities found below translucent rocks to understand microbial responses to environmental stressors. Recently, he established several related research themes, including the first South African programme focused on marine microbial ecology of the Southern Ocean.

Number of rated researchers per annum at UP: He said being awarded a P-rating “marks the fulfilment of a goal I set at the end of my PhD, and I am extremely delighted”.

“This is a great recognition of my research, and I am grateful to my students and colleagues who have contributed to this rating. I am also grateful to my family for the ongoing support that allows me to dedicate a substantial part of my time to my research,” Prof Makhalanyane said.

The total number of NRF-rated scientists at UP is now 565.

“We are delighted with our researchers’ accomplishments,” said UP Vice-Chancellor and Principal Professor Tawana Kupe. “The University of Pretoria is one of the biggest producers of research in the country. We produce cutting-edge research that matters.” 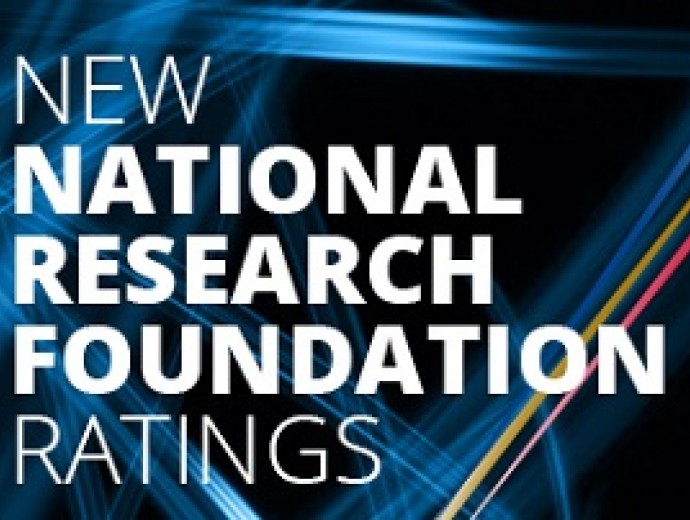