A team of University of Pretoria students has taken second place after competing against more than 400 teams from around the world in a leadership-focused case study competition.

The global multi-stage business strategy and leadership-focused case study competition is organised annually by CharterQuest Institute South Africa. It challenges university students around the world to solve a set of complex and integrated finance, operational, strategic and ethical problems that beset a real-world global business in the emerging markets. The gruelling final round saw Team Fynergy competing against the 2018 winners, Team UKZN from the University of KwaZulu-Natal, and the University of Münster Case Club (Team UMCC) from Germany, which took third place.

Team Fynergy’s members are unanimous in their appreciation of the opportunity to participate in the competition and represent their university and country. “I could not be more proud of how far we went in this competition. All the months of hard work, the pressure, the tears and of course the late nights were well worth it, because we have gained so much value from this experience,” Zaneta Boshoff said.

Megan Henshaw was particularly proud of her team’s performance against an international pool of students. “I am so happy we made it this far and that we had the opportunity to compete with top students from all over the world. I am also very proud of my group for giving it their best, as it certainly paid off.”

Marissa Smith stated: “It was an absolutely amazing experience for us all. We had some mixed feelings, being close to tears at times due to the pressure we faced, but we are also extremely happy, as in the end it was worth it all. We have now built an endurance which we didn’t have before, and no matter what life throws at us, we will succeed.”

The students were mentored by Ms Elize Kirsten, Lecturer in the Department of Financial Management, who said: “We at the Department are extremely proud of the team, as they managed to overcome many obstacles in this international competition and competed against more than 400 teams from all over the world.” 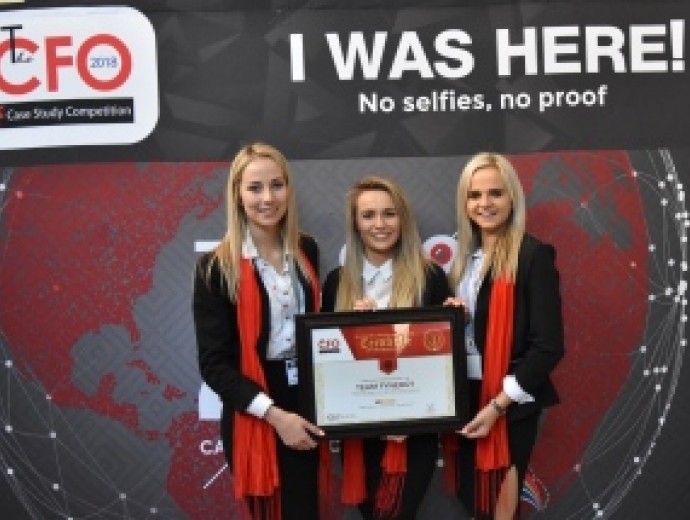