Unravelling the mysteries of meerkat behaviour

Meerkats are fascinating animals that display intricate social behaviour. They live in groups of between four and 35 individuals and each group is governed by a dominant breeding pair that sires up to 90% of the surviving offspring. Other individuals in the group are subordinate to the dominant individual of the same sex. Subordinate mammals display high levels of co-operative behaviour, helping in pup raising and feeding. Despite their co-operative behaviour and assistance in things like pup-feeding and babysitting of the dominant pair's offspring, the dominant female is aggressive towards subordinates, causing high levels of stress among the subordinate females. Researchers at the University of Pretoria (UP) form part of the Kalahari Meerkat Project (KMP) in the Northern Cape's Kuruman River Reserve, which has studied groups of wild meerkats for over 20 years. This project was started by Professor Tim Clutton-Brock, extraordinary Professor at UP and director of research of the Department of Zoology at the University of Cambridge. The KMP is a collaboration between the University of Cambridge, the University of Zurich and the UP Mammal Research Institute (MRI). It is managed in South Africa by Dr David Gaynor of the MRI and is focused on better understanding co-operative behaviour in these animals in order to gain greater insights into the social structures of mammals.

Recent studies within the project have focused on gaining novel insights into the maintenance of co-operative behaviour. UP researchers from the MRI, including Prof Nigel Bennett, and Professor Andre Ganswindt, Director of the MRI, in collaboration with other researchers in the KMP, simultaneously investigated multiple social, environmental and individual factors that affect stress levels of subordinate meerkats.

The study explored whether conflict between dominant and subordinate meerkats affect alloparental care by altering the levels of the stress hormone cortisol. This was assessed by looking at how the stress hormone cortisol affects assistance from subordinates with pup-feeding and babysitting, and what role food availability and other characteristics of the social group play in the levels of stress hormones in subordinate meerkats. By assessing stress levels in these different scenarios, more insight was gained into social conflicts and the cost of co-operation. By gaining greater insights into the social structures and behaviours of meerkats, Dr Gaynor and the KMP hope to improve future conservation practices of wildlife populations. The project continues to follow about 300 meerkats in the reserve on a daily basis, enabling the project to provide detailed information on how interaction between individuals lead to higher stress levels, and to measure the effect of different individual behaviours on the lifetime reproductive success. 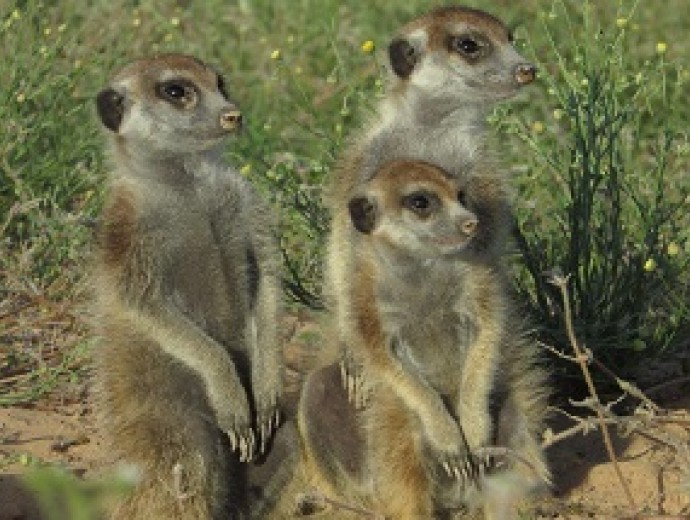