A University of Pretoria (UP) professor and his third-year conservation ecology students have embarked on a novel campaign to contribute to carbon dioxide reduction in the atmosphere and raise awareness about climate change – by growing spekboom in non-recyclable coffee cups.

Characterised by its small bright green leaves and reddish stems, spekboom is an indigenous plant that has surprisingly powerful properties. “Increasing carbon dioxide levels in the atmosphere is resulting in climate change,” says Professor Adrian Shrader, Deputy Head of Teaching and Learning in the Department of Zoology and Entomology, and an Associate Professor of Mammalian Behaviour Ecology, who is leading the project. “Spekboom has enormous carbon-storing capabilities, so growing it is one way to try to reduce carbon dioxide.”

Prof Adrian Shrader and his third-year conservation ecology students have embarked on a novel campaign to contribute to carbon dioxide reduction in the atmosphere by growing spekboom in non-recyclable coffee cups.

The project is also acting as an awareness campaign. “The hope is to raise awareness of both climate change and the opportunities to help reduce carbon, and highlight the issue of single-use containers,” Prof Shrader says. “For example, a thicket of spekboom is 10 times more effective per hectare at carbon fixing than the same area in a tropical rainforest. Moreover, each hectare of spekboom could capture 4.2 tons of carbon yearly. Thus, the more there is, the larger amount of carbon stored.”

Prof Shrader and his students plant spekboom in coffee cups that are usually used only once. “Coffee cups might seem recyclable because they are made of paper, but they actually contain a thin layer of polyethylene, which allow the cups to hold liquid,” he says. “But that makes them non-recyclable. I saw so many coffee cups being used and thrown away on campus, so I thought that using these cups would be a good way to generate awareness.”

Speaking to who is driving this project, he said: “The students are the ones that have been bringing in cups and spekboom clippings. There are also a couple of staff members who are collecting cups and growing clippings.”

To date, Prof Shrader and the students have about 90 spekbooms growing. Once they have been planted, they will be given away to staff and students. “My hope is that they will take care of them and eventually plant them in pots or in their gardens,” Prof Shrader. “Every little bit helps. Also, I hope that this will encourage people to move away from single-use coffee cups and instead buy reusable cups.”

He encourages staff and students to view the coffee cups as well as social media projects such as blogs, podcasts and videos created by the third-year students that will be displayed in Merensky 2 Library on 12 and 13 September 2022. “Go check it out – you can learn something about conservation issues and get a free spekboom,” Prof Shrader said. 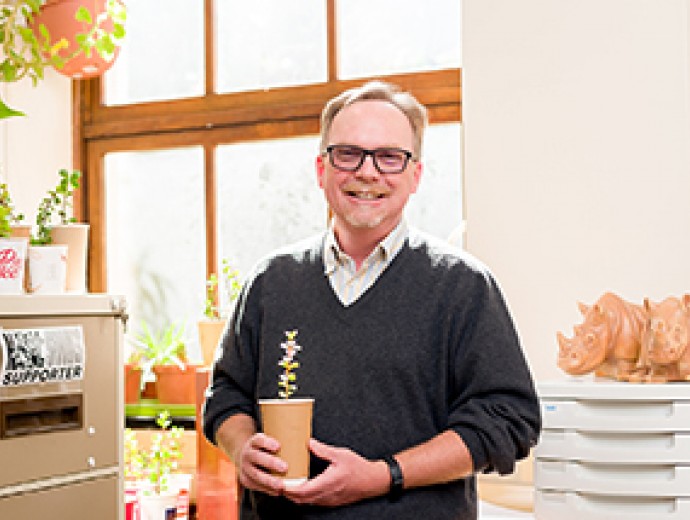 Prof Adrian Shrader, Deputy Head of Teaching and Learning in the Department of Zoology and Entomology is leading the spekboom project.