UP Pre-University Academy kicks off 2022 with learner orientation programmes

The academy centres its work on the idea that the future of higher education depends on the quality of learners that the primary education sector produces. As such, it bridges the gap between primary and higher education, with the aim of producing the next generation of leaders who are grounded in their academic disciplines but who can also think across disciplinary boundaries and engage as educated graduates in debates about diverse and contemporary issues.

Grade 10 learners attended their orientation session at Groenkloof campus on 26 February 2022. Thirty schools in the Tshwane area identified 350 learners to write the admissions test to be included in the 2022 UP-PUA cohort who will attend classes on Saturdays at Groenkloof campus; 164 learners were selected.

Professor Nthabiseng Ogude, Acting Director of the UP-PUA, welcomed and congratulated the selected learners. She indicated that they would learn new competencies such as critical thinking, debating and advanced computer skills that will help them improve their grades at school and prepare them to access higher education. The orientation session included an introduction to the subjects that will be presented during 2022. The curriculum consists of STEAM subjects: mathematics, chemistry, physics, advanced computer literacy, philosophy, academic readiness and support, and academic and creative writing.

The buy-in of parents of school-goers plays a significant role in the success of the academy and that of the learners. Solly Mahlatjie, the father of a learner from Hillview High School, indicated that his child, Theresho, would like to become a medical doctor one day. He believes that Theresho will have a better opportunity to access a higher education institution by attending the UP-PUA.

Another parent, Matsobane Mabusela, shared that the UP-PUA will develop his daughter Thabitha’s self-esteem as she will engage with academics and other successful peers. He hopes that by attending the academy, she will become more driven to succeed. Thabitha hopes to become an astronomer.

Wakisa Fweta, a learner from Pretoria Technical High School, said that by attending the UP-PUA, she will achieve her dream of becoming a gynaecologist; while Olwethu Sithole of Clapham High School feels sure that he will improve his mathematics and physical science marks and be able to enrol for a degree in electrical engineering.

On 19 February, 124 Grade 8 and 9 learners from Mamelodi attended the orientation session for the developmental pivot on Mamelodi campus.

UP-PUA manager Moloko Malahlela welcomed the cohort and their parents and indicated that the programme aims to provide learners with the necessary skills to prepare for higher education. The focus in 2022 will be to include learners in the Tshwane area, yet the aim is to expand the project nationally.

Grade 9 learner Masego Mothica said he is looking forward to the academic activities of the year. He was involved in the PUA in 2021 and said it would help him to apply to become a veterinarian. Neo Molekoa, another Grade 9 learner, reflected that he is looking forward to learning computer skills that will put him in good stead when he applies for a degree in electrical engineering. 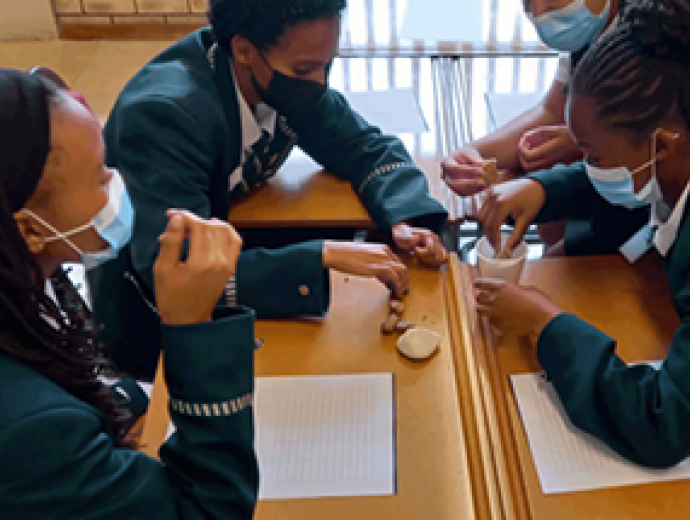 Preparing the next generation of school-leavers to excel at university.