On the 2nd of August, the Director of the Unit for Academic Literacy, Prof Adelia Carstens, presented a key note address at a language indaba which was hosted by the Cape Peninsula University of Technology. The theme of the event was Language and decolonisation. Prof Carsten’s presentation was entitled “The language question in higher education: Transformations in our doing, talking and thinking”. All participants gained immensely from her reasoning and the key note was followed by lively discussion.

By critically engaging the interplay between language and decoloniality, Carstens opened her talk with reference to three, key theories. These were social realism, cultural mismatch theory and process models. Social realism was applied as her ontological framework. In this framework, human experiences are viewed as being emergent from the interplay of social structures, culture and agency. Carstens also illustrated how, in a social realist ontology, society is stratified into three levels. These are the actual, the empirical and the real. Briefly, the actual domain houses social events, the empirical domain human experiences of them, and the real domain contains those mechanisms which produce social events, including teaching and learning. Real mechanisms include structural and cultural systems. Linking this ontological map to language and decolonisation, Carstens stressed that effective application of structural and cultural systems in the higher education domain may lead to change, or transformation, in how academics approach language utility. This change is known as morphogenesis. On the contrary, our failure to effectively align these systems results in morphostasis, or, reproduction of previous, pedagogic and linguistic traditions.

Carstens also described the cultural mismatch theory of inequality to highlight how, in institutions of higher learning, norms do not always correlate with those values and principles harnessed by underrepresented or previously marginalised, social groups. The effect of this mismatch is that inequality is fuelled by creating barriers to students who historically were excluded from higher learning. She also elucidated how the application of language, as a cultural tool, may further erect barriers to students’ successes in learning. Carstens’ third, applied theory was that of process models. Process models, in her view, are relevant to the decolonial project in that they highlight how academics and language practitioners often go through various phases in implementing their projects. These include, but are not limited to, rediscovery and recovery, mourning, dreaming and action. Additional concepts associated with the theory of process models include deconstruction and reconstruction, self-determination and social justice, indigenous experiences and history. In summation, each of these processes are active in the South African context as we endeavour to evolve our disciplinary and institutional cultures. While such a project is necessary, it requires grit and determination by universities as it is a difficult one which often faces resistance. However, with powers of critical human reflection and collaboration, it is possible to apply Discourses in a manner which aids the decolonial turn in our universities. Specific Discourses which Carstens referred to were those of decolonisation, alienation, epistemological and ontological access, as well as the Discourse of powerful knowledge.

Prof Carstens concluded her key note address by asserting that while conversations around decolonisation of the curriculum, including application of language, was a sensitive matter, universities must stay engaged in the conversation. Academics and students alike must be prepared to experience discomfort, speak their truth and dually expect and accept that solutions often lay in the very conversations we have with each other. Click here to access presentation. 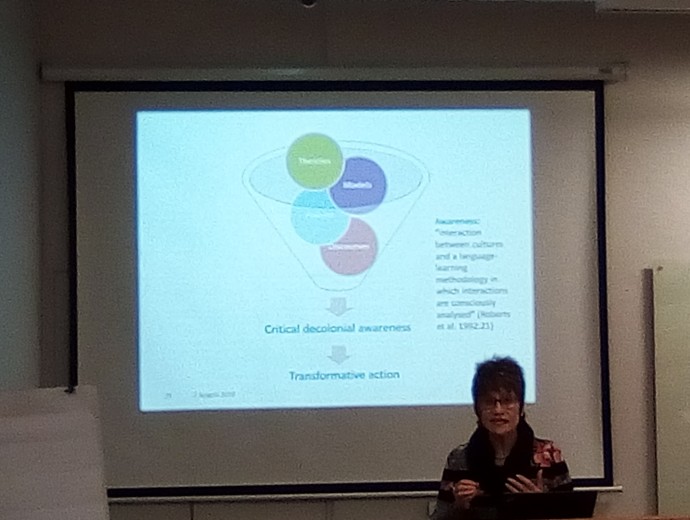