On Thursday, 6 October 2022, TuksHockey made history when their men's and women’s teams clinched their respective Varsity Hockey titles during the Varsity Sports Festival hosted at the University of Pretoria.

In the history of Varsity Sports, it has not happened. The chances that men's and women's teams of the same university ever repeat this feat on the same day are slim.

Both Tuks teams had their work cut out to win. The women's team only secured their victory against Maties in the dying two minutes of the final. Fittingly, it was the team's captain Tegan Fourie who scored the winning goal. The final score was 4-3.

The men's final between Tuks and Wits turned out to be a battle of the drag flickers. Every goal came from a penalty corner. The Tuks captain, Guy Morgan, and Bradley Sherwood, were on top of their game not missing. Morgan got a hat trick of penalty corners. The final score was 4-3.

The last time the men’s team got to play Varsity Hockey was in 2018. Tuks won their maiden title beating Maties 5-0 in the final.

For the Tuks men’s team head coach, Sihle ‘Sigz’, the 2022 edition was a case of "I love it when hard work pays dividends".

According to him, the fact that Morgan and Sherwood ended up with a 100% scoring record from four penalty corner attempts is not something that just happened. Their heroics is the result of hard work and long hours.

"The final was an excellent example of how good Guy (Morgan) and Bradley (Sherwood) are as drag flickers. They are world-class. Guy proved that during last year's Junior World Cup tournament by being one of the top goal scorers. Bradley is a classic striker who can score in any situation.

"Our team strategy is to get teams to concede penalty corners partly due to their exceptional drag flick skills. It is crucial to bank on scoring from penalty corners, especially if you don't score field goals.

"Guy and Brad are committed to being the best they can. They train every day of the week. After their teammates finish, they will still be honing their drag-flicking skills. Even on Sundays, you will see them and me on the TuksHockey Astro strategising to find ways to be better."

According to Ntuli, playing Wits in the final was challenging.

"Wits play a different brand of hockey. Their style is very confrontational. They love one on one situations being in their opponent's face. It is their way of putting an opposition team under pressure.

"I am proud that my team did not let it get to them. The statistics will show that we dominated most facets of the game. Hats off to Wits' goalkeeper. He is the one who kept them in the game right to the end. I also got to complement the Tuks defenders, they hardly erred over the two days.

Inky Zondi who is the Head of Programme & Women’s Head Coach at TuksHockey ascribed the women's success to pure guts and determination.

"They wanted to be champions. That is why they never gave up, even though the Maties were leading 3-2 in the game's dying moments."

Zondi does not like singling out specific players, but he can't help but be excited about how Hanrie Louw played on defence.

"I was also impressed by how the team's two captains, Onthatile Zulu and Tegan Fourie, combined. Onthatile set up the move that led to Tegan scoring our winning goal. Hats off to Tegan. It took 'ice in your veins' to score the goal she scored."

All thanks to TuksHockey's heroics, the University of Pretoria has won four of the six Varsity tournaments this season. TuksRugby won the Varsity Cup and the Varsity Young Guns. 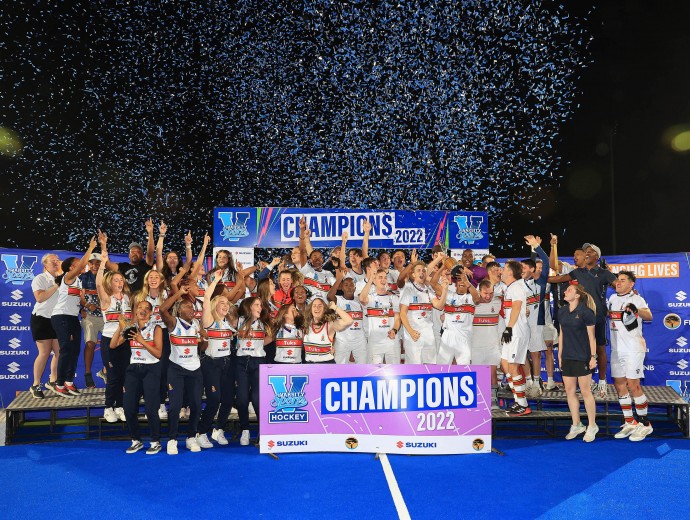