#TuksWomensRugby: Libbie Janse van Rensburg gets a thrill every time she scores for the Springbok Women

Points on the "board" are guaranteed when Libbie Janse van Rensburg steps onto the field to play for the Springbok Women.  On the field, she is the TuksWomensRugby Administrative Assistant & Programme Coordinator at TuksRugby.

In the recent Test Series against Spain, she scored 32 points. Against Japan, in two tests, she contributed 11 points. Thereafter, there was that "cricket test" against Namibia in which she amassed 36 points (14 conversions and two tries). It is the most points scored in a test by a Springbok Women player.

Last year in November, she scored a brilliant try against Wales. Playing as an inside centre, she got the ball in her own half. She went on to outwit the Wales defence with clever sidesteps and pure speed to score.

The TuksWomensRugby player is not one to be fazed about statistics. For her, rugby games are won or lost on the field by putting bodies on the line.

"Playing England will be challenging. I honestly believe we can beat Fiji. That means France will be the crunch game. We can beat France, but it will take a considerable effort. Everyone will have to be 100% committed. We will qualify for the playoffs if we win two of the three games."

"I have already started to analyse France's games. I am especially focussing on how Caroline Drouin (flyhalf) plays. I must admit she is good, but it seems she can get rattled if there is pressure."

According to Janse van Rensburg every time she dons the coveted "green and gold" jersey, it feels unreal.

"It is as if I play for the Springboks for the first time. I don't know if I will ever get used to playing for the Boks. The one thing I have mastered is to be utterly focused from the very first moment I step onto the field. That is what good flyhalves do."

When asked what she considers her "Wow moment" playing for the Springboks, the Tuks-based player immediately singled out the test against Spain, in which she scored 19 points.

"I had a 100% kicking record converting five tries and succeeding with three penalties. It is something I will remember for a long time."

In the second test against Spain, she achieved something few Boks players (male and female) have done. That is to drop score and place.

"I first met Aimee when I started playing touch rugby and she was playing as well. What is amazing about her is her passion for rugby. She is always prepared to share her knowledge and believe me; she knows a lot. I have already contacted her to help me analyse France's recent games.

"I guess I will be the forever student of the game. It is essential to do so, especially if you want to be better than your opponent."

Nadine Roos (fullback) and Rumandi Potgieter (scrumhalf) are the other TuksWomensRugby players in the Springbok Women’s team. 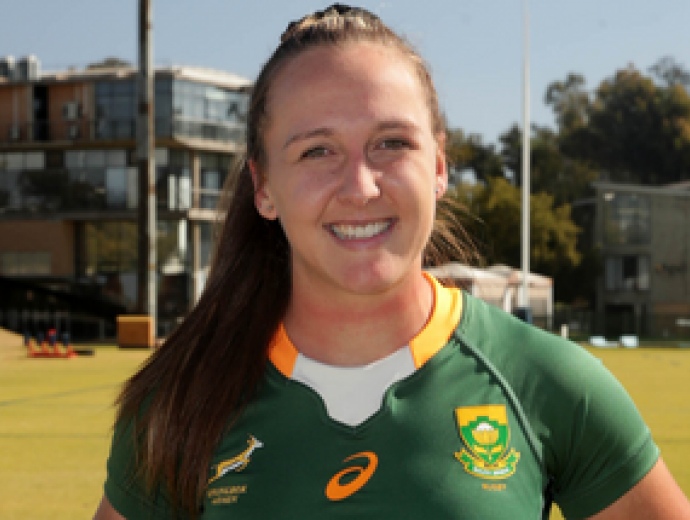