#TuksSwimming: Tatjana Schoenmaker and Kaylene Corbett write their own history at the Birmingham 2022 Commonwealth Games

They are the first two female swimmers to medal in the same event at the Commonwealth Games since 1994. Schoenmaker won the 200m-breaststroke in 2:21.92, with Corbett finishing third in 2:23.65. It is interesting to note that they are actually the first female athletes to do so for South Africa in any sport at the Games.

South Africa's male swimmers have accomplished this feat on quite a few occasions.

Schoenmaker of Tuks, is also now one of South Africa's top female gold medallist winners at the Commonwealth Games. Her recent victory means she now has three gold medals to her name. During the 2018 Gold Coast Games, she won the 100 and 200m-breaststroke events.

The Paralympian, Natalie du Toit, had won seven gold medals since 1994 at the Commonwealth Games. Tracy-Lee Botha (lawn bowls) is the only other South African female athlete to have won three gold medals.

For Schoenmaker, it is not about personal statistics. Corbett's heroics got her smiling, and with good reason. Birmingham was the fifth time since 2018 that she and her best friend, Kaylene, swam the 200m-breaststroke final together at a major event.

They first did so during the 2018 Gold Coast Commonwealth Games, then the 2019 World Student Games, the 2019 World Championships and the 2021 Tokyo Olympic Games last year. Schoenmaker medalled on each occasion - winning three gold medals and a silver. At long last, Corbett stood alongside her on the winner's podium.

"I knew Kaylene could do it. She only had to believe she was good enough to win a medal. As for my own race, I swam to the best of my ability. I would have liked to have swum a faster time. But then again, I am grateful for every victory. Every medal is special." Schoenmaker said.

The Tuks-based Corbett had to fight back the tears from the moment she touched the wall and realised she had finished third. After receiving her medal, she thanked the Games official, saying, "Baie dankie".

According to Corbett, she has never fought so hard in a race as she did over the last 25 metres.

"I pushed myself to the utmost, praying all the time as I did so."

Still filled with emotion, she added that she, Schoenmaker and a few others had been on a mission to prove that South African female swimmers have what it takes to compete against the world's best.

"Our motivation came from the fact that there were no female swimmers selected to represent South Africa at the 2016 Rio Olympics. Putting in the long hard hours, we started to change things one small step at a time. In 2018 I was in the stands crying with joy as Tatjana received her medal during the Gold Coast Games. Now I am on the podium beside her, sharing tears of joy." 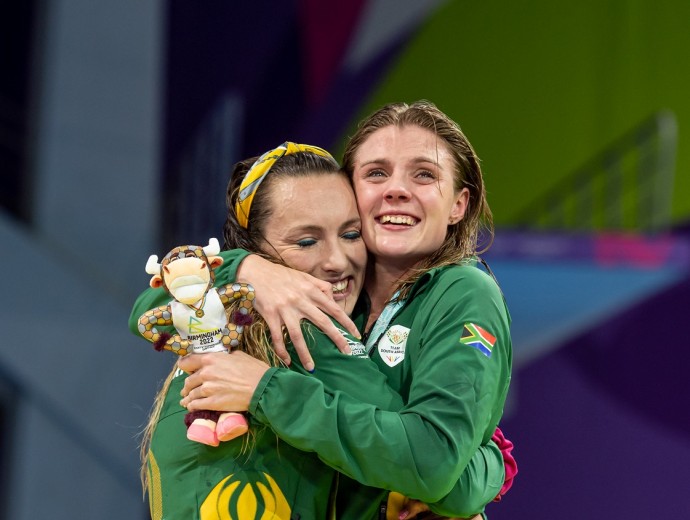