11 years ago, Rimari Sutton promised herself that she would never cycle again, at least not competitively.

To her, there was no fun to consistently have your legs and lungs burning but as it is said, never say never. The 22-year-old, Tuks student will represent South Africa at the 2022 UCI Mountain Bike World Championships that will take place from 24 to 28 August in Les Gets, France.

Since the day, she "nearly quitted", a lot has happened. She is the 2022 South African U-23 cross country champion, won silver at the African Games and has been a multiple national marathon-series champion. Sutton has even won gold at the National Track Championships as well as being a provincial individual road-time trial champion.

She is amused when she thinks back to when she made her cycling debut, racing five kilometres.

"To date, I still consider it my most challenging race ever. A slight incline felt like I was riding up a steep mountain. Needless to say, I was totally knackered afterwards. It is why I promised myself that I will never cycle again."

Nearly a year later, her dad, Richard, convinced her to give cycling another go. The ride was also not without incidents.

"As luck would have it, I rode over a python. It was pretty big. My dad wanted to stop and pick it up, but I told him there was no way of him doing so. I urged him to please keep on cycling. Apart from the incident with the snake, I enjoyed myself. Actually, it is the day I got hooked on cycling."

The last standing constant throughout her cycling career has been her dad. He is a training partner, coach, confidant and the man with the plan. When she decided to earnestly compete in cross country races, her dad built a course with various challenging jumps and obstacles on their small holding in Pretoria East.

"In the build-up to last year's National Cross Country Series, my dad made me do 100 jumps a day. It paid dividends because when I raced, there was never a moment I felt nervous."

Despite all she has achieved, Sutton will never rest on her laurels. She believes winning titles boils down to a forever quest for perfection.

"It will be the first time I compete at the World Championships. My dad always reminds me that becoming a champion is about taking one step at a time. There will never be a day when I can say I am a complete cyclist. There will always be something I got to work on to become faster, fitter or stronger. It is a challenge I love.''

Sutton likes to sketch or play with the family's dogs when not cycling. Even though she is 22, she admits that she can't resist to still climbing trees. Rock climbing is another favourite pastime.

Working with children and encouraging them to have dreams and go for them is something else she likes doing. In between all of this, she is currently studying Postgraduate in Entrepreneurship at UP-Tuks. 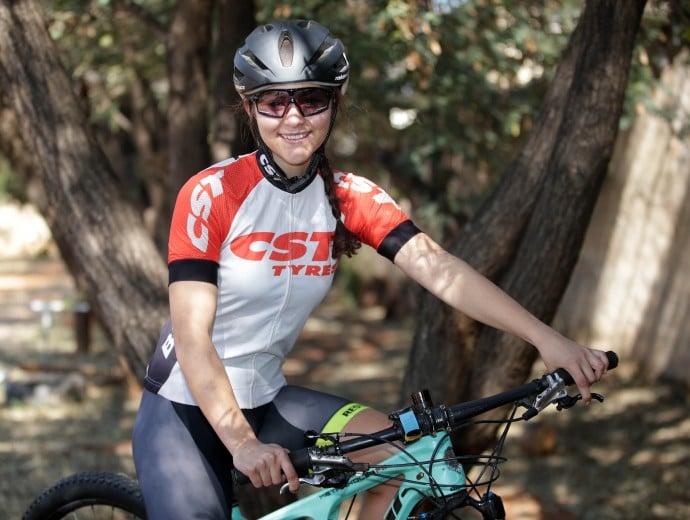