For a while, the South African men’s long jump champion, Jovan van Vuuren, has predicted that he is ready to go "big". Maybe it will happen over the weekend during the 2022 World Athletics Champs in Oregon.
It certainly has been the Tuks athlete's best season to date. He set a new personal best jumping 8.16 metres at Tuks. He has jumped 8.10m or further in four other local competitions, winning each time. As of 11 July 2022, he is 18th in the men's long jump - World Athletics Rankings.
If it was not for COVID-19, he could have medalled at the recent 2022 Africa Athletics Championships in Mauritius. He managed to do enough in the qualifying rounds to go through to the final.
"The night before the African Champs final, I hardly slept. I had a fever and body pain. I still decided to compete. But it ended up being a 'bad day at the office'. Afterwards, I was 'man' down for three days. It is undoubtedly one of the biggest disappointments of my athletics career. I don't doubt that I would have medalled. Unfortunately, it does not help to keep wondering what could have been. The focus is now to be the best I can be during the World Championships."
The Tuks student-athlete readily admits to being a novice when it comes to competing internationally. It is the first time he is competing at the World Championships. But it is not going to deter him.
"Some might find it intimidating to compete against athletes they previously only saw on television and considered to be heroes. It is not me. As far as I am concerned, everyone is human like me. There are times when we all make mistakes. The challenge during Worlds is not allowing it to get to you and just focus on the next jump."
According to van Vuuren, having Ruswahl Samaai also competing in the long jump will be like having a 'brother in arms' next to the sand pit.
"Ruswahl has been like a mentor to me over the last few years. I regularly speak to him, 'picking' his brains as to the dos and don'ts of being competitive in international long jumping. His advice has always been sound. I am sure he will calm me down if he sees me getting rattled during the World Champs. Hopefully, he will also see me as an ally during the competition."
For the record, Samaai won a bronze at the 2017 World Athletics Championships and was a finalist in 2019. He is a two-time Olympian.
To ensure he can handle pressure situations, Van Vuuren regularly challenges himself during training.
"I love making side bets with fellow athletes on the track. I would tell them that I would jump a specific distance. If I don't, I could end up doing five more repetitions of a particular exercise. But if I succeed that they are the ones who need to do more.
"My coach, Neil van Vuuren, and I also like to create specific scenarios during training that might play out during a competition. It is a way of testing my nerves."
Van Vuuren will compete on Friday at 18:00 (03:00 Saturday SA time) in the long jump heats. The final is Saturday at 18:20 (03:20 Sunday SA time).
Other Tuks athletes competing at World Champs are:
• Gift Leotlela (100 metres).
• Wayne Snyman (20km race walk).
• Prudence Sekgodiso (800m).
• Zeney van der Walt and Taylon Bieldt (400m-hurdles).
The Tuks BSportSci-student, Marione Fourie, will compete in the 100m hurdles.
- Author Wilhelm De Swardt
Share this page
Published by Bhekani Ndebele 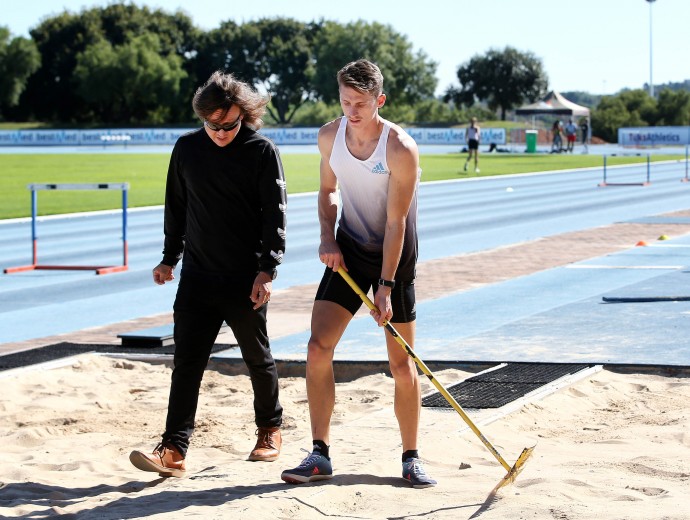