South Africa has got a new sprinting sensation. She is 16, her name is Viwe Jingqi and she fast really fast. She proved it today at the 2022 South African Junior and Youth Athletics Championships in Potchefstroom.

The TuksSport High School learner-athlete broke the South African under-18 100-metre record three times in less than seven hours. She ran 11.40s during the heats. Jingqi was even faster in the semi-finals running 11.36s. But she kept her best for last in the final when it really mattered. She clocked 11.22s and won the title.

At the moment, she is the fastest under-18 female 100m sprinter in the world. Only seven senior athletes have been faster so far this season. The 11.22s she ran in the final is also a new South African junior record (under-20). Marcel Winkler ran 11.25s in 19.89s.

Jingqi broke the national record for the first time in February during the Twizza Super Schools Meeting in Ruimsig when she ran 11.47s. It was the fastest time by a South African under-18 athlete in 38 years and four months. The previous record was held by Mari-Lise Furstenburg, who ran 11.56s in November 1983.

The well-known athletics statistician, Danie Cornelius, predicted after the semi-finals that Jingqi could dip under 11.30s.

"If the weather plays along, she will do it. Her coach, Paul Gorries, agrees with me that she can do something amazing," Cornelius said at 14:00. Less than four hours later, she ran 11.22s.

"Viwe's race was phenomenal, especially since the temperatures were dropping. If Paul keeps on coaching her, there is a real chance that she can dip under 11 seconds as an under-20 athlete.

"But what she has achieved today is remarkable from a South African perspective. Since 2012 Carina Horn and Tebogo Mamathu have been the only two South African sprinters to dip under 11.30s in the 100 metres.

According to Cornelius, there is a real chance of Jingqi also setting a new national record in the under-18 women's 200 metres. In March at Tuks, she clocked 23.36s. Only Evette de Klerk has been faster, running 23.30s in 1982.

TuksSport High School matriculant & TuksAthletics Academy graduate, Benjamin Richardson, was the other Tuks sprinter who impressed. He won the men's under-20 100 metres race in 10.19s. 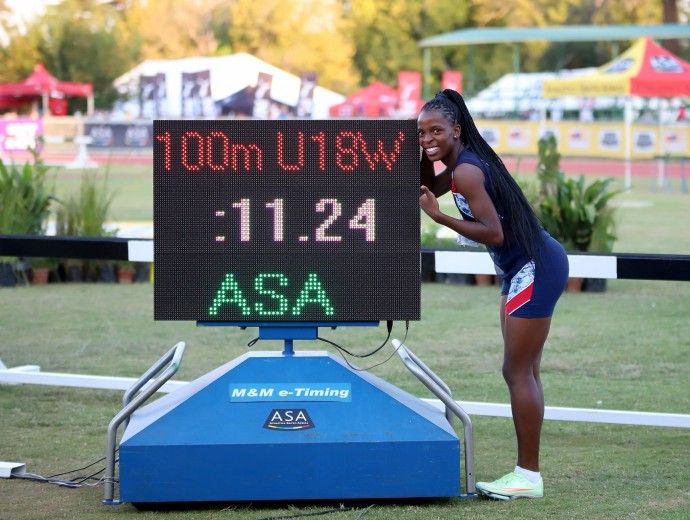