#TuksSport: Akani Simbine and Tatjana Schoenmaker crowned as Sportsman and Sportswoman of the Year at the 2021 TuksSport Awards

The 2020 Olympic gold medallist and World Record holder, Tatjana Schoenmaker (now a TuksSport High School matriculant), is the University of Pretoria Sportswoman of the Year.

On Monday, 15 November, at the Future Africa Campus, it was also announced that she is the TuksSport Newsmaker of the Year. Akani Simbine is the Sportsman of the Year.

While the 23-year-old, Tuks swimmer was still coming to grips with her newfound fame and the magnitude of her achievements, Schoenmaker still relished the small victories. After the small successes, she believed, have helped her on her way to the pinnacle of her sport.

"I might have reached the pinnacle in sport or swimming, but I still don't feel like it because I still have to grow so much," said Schoenmaker.

"There are so many technical things I still want to work on in my swimming. There's so much space for improvement, and I think that's the amazing part of having those little small goals. It's not always necessarily achieving that big goal of going to the Olympics, but it's achieving those small goals that you achieve greatness every single day."

As the spotlight's glare grows on Schoenmaker, she remains a team player despite swimming being an individual sport. Schoenmaker is quick to credit her Tuks teammates, her coach, Rocco Meiring and her support system for her success in the pool.

The South African 100m record holder, Akani Simbine, ended the 2021 athletics season as one of the top ten fastest sprinters in the world. A definite highlight was running 9.84s in Hungary in July. It is the second-fastest time by an African sprinter.

During the Tokyo Games, Simbine finished fourth in the final running 9.93s, missing out by 0.04s on winning a medal. Simbine admits that was not the result he had sacrificed so much for.

"But the experience made me a stronger person. I have learned how to deal with adversity. I know now there is more to the story of 'Akani Simbine' being a 100-metre sprinter. I appreciate being blessed with a unique talent. I want to make the most of it.

"I was down, but now I am back. I am in the business of trying to be better in everything I do and not only on the track. My aim is to be a better athlete and human being so I could be a role model to others."

Kaylene Corbett is Tuks's Student Sportswoman of the Year. She finished fifth in the 200m-breaststroke final.

If there was going to be a prize for "Comeback of the Year", Gift Leotlela would be a definite contender in 2021. In May, during the USSA Championships, he won the 100 metres in 9.94s. He became only the sixth South African sprinter to dip under 10 seconds over 100 metres through his speedy heroics. That is why he is Tuks's Student Sportsman of the Year. 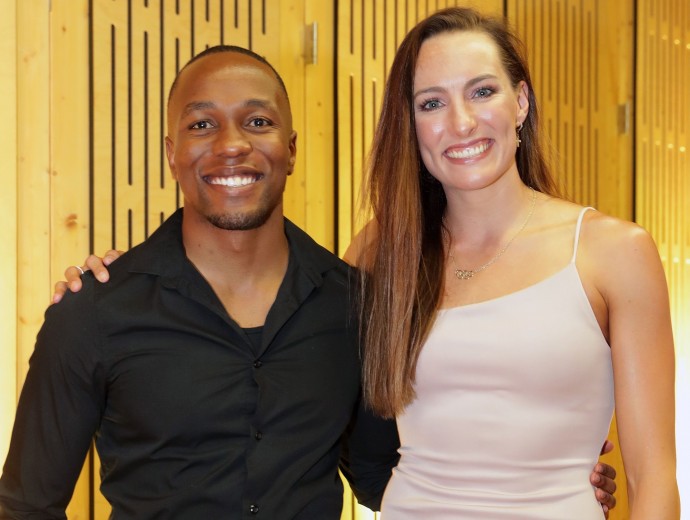