It is often said that sports change people’s lives. In the case of Abueng Sekgwelea, it is true.
The day, she entered a taekwondo dojang as a 12-year-old for the first time, she started a process of inner healing. Within weeks she had regained her self-worth.
What she started doing in anger became a passion. Sekgwelea is now the Secretary-General of the South African Taekwondo Federation. If she can have her way, every young girl should consider taking up the sport. Sekgwelea takes up her story herself.
"I grew up in rural Northwest. My mom suffered a lot of physical abuse. At the age of 12, I was raped. Shortly afterwards, I heard about a sport called taekwondo. Because it was a fighting sport, I was immediately interested.
"I needed to learn how to defend myself. There was no money for me to officially join up. It meant that I had to resort to lying to be allowed to train.
"As I was not sure as to how long I was going to get away with it, I promised myself that I was going to make the most of every moment on the taekwondo mats. I wanted to learn as much as possible. I would never allow any man to take advantage of me ever again.
"Little did I know that entering a dojang is not about beating up people. The sport is about respect. I am now at a point where I made peace with what happened. Now it is about passion for the sport. I 'breathe, walk and sleep taekwondo'".
Sekgwelea passion did not go unnoticed. She got a bursary from the Embassy of the Republic of Korea in South Africa to complete her schooling at TuksSport High School. She did so in 2009.  Nowadays, she has her own dojang in Randburg. She also coaches at private schools.
If she can have one dream come true, it is to help a South African taekwondo athlete compete at the Olympic Games.
"It was my dream to win a medal for South Africa at the Olympics. I represented South Africa internationally, but things did not quite work out as I had hoped. The challenge now is to get someone else to win that medal for South Africa. Would that not be great?"
Last month, TuksSport alongside the TuksTaekwondo, hosted the Korea Ambassadors Cup tournament and up to 250 taekwondo players were expected to compete. Sekgwelea was present on the day, next to the mats cheering on the youngsters.
- Author Wilhelm De Swardt
Share this page
Published by Bhekani Ndebele 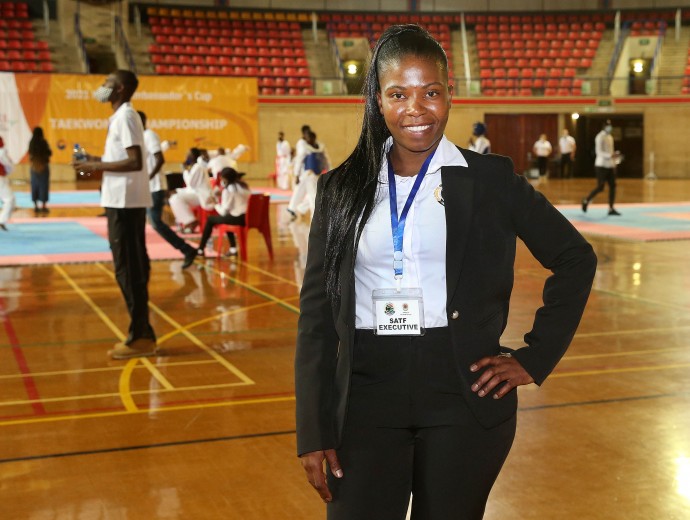