#TuksWomensRugby: Libbie Janse van Rensburg cannot wait to score for the Springbok Women again ahead of their 2021 November Series in Europe

Touch rugby, sevens rugby or rugby to Libbie Janse van Rensburg it is all the same. All the Tuks player cares about is being on the field and playing if she gets to score even better.

It is why she got so excited when she scored her first try for the Springbok Women against Kenya in August. It will not be the last time she "dives" over wearing the coveted green and gold jersey if she can have it her way.

She might not have to wait that long before she gets to do so. Janse van Rensburg is part of the Women Boks team, playing against England, France and the Barbarians this month. Rumandi Potgieter (scrumhalf) and Nadine Roos (fullback), are the other two Tuks rugby players part of the Springbok Women travelling squad.

Janse van Rensburg began playing rugby at a young age. She grew up on a farm in Ellisras. Her nephews always looked for players to strengthen their teams. She had no qualms about joining up in these fiercely contested encounters.

"I was quite a keen rugby player up to the age of 13. At the time, I thought that rugby should not be a sport that girls should be playing. I then started playing 'girly' sports like hockey and netball. I was quite good at it."

Everything changed when she got the opportunity to play touch rugby. Janse van Rensburg took running with a rugby ball like a fish to water. A definite highlight was representing South Africa at a World Cup Tournament in Australia. The team finished 4th overall.

One thing led to another. Soon afterwards, Janse van Rensburg started playing sevens rugby for Tuks. It did not take long before she captained the team. With her leading from the front, Tuks won various international tournaments. Tuks even got to beat some national teams. Needless to say, she raked in a few awards as the best player.

She only started this year to play "real rugby", representing the Blue Bulls. She made her Springbok debut against playing flyhalf against Kenya.

Janse van Rensburg describes herself as being a tactical flyhalf.

"It is not as if I mind getting physical on the field, but if I can get away with not really having to put my body on the line, it is better. To me, it is a way of prolonging my playing career.

"I realised in the second test against Kenya that if the need arises, I can get physical. When I took to the field, the Springboks were trailing. I said to myself, this can't be. There is no way the Springboks is going to lose. Somehow I knew I could make a difference, and I did. There was that one moment when I got the ball that I just went for it. It was a brute force that got me over the try line."

In the last week of October, the Springbok Women’s team gathered at the hpc in Pretoria for a five-day camp, to begin their preparations for the tour, as well as a COVID testing schedule to mitigate risks pre-departure. They left for Europe on 31 October. 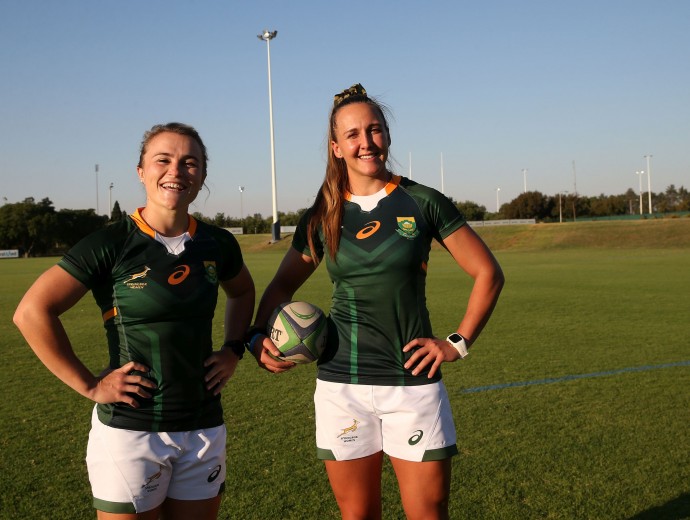