The Delta Drone TuksWomensRugby sevens team, under the captaincy of Sesihle Maguga, has qualified to compete at the 2022 FISU University World Cup Rugby 7s in Russia after winning the 2021 Kings of Africa University Rugby 7s tournament in Kampala, Uganda.

Riaan van der Merwe, Tuks head coach, can be forgiven for being thoughtful, "I love it when a plan comes together". Since last year, he has been plotting how he would get Tuks to win.

"The Covid pandemic made things genuinely challenging over the last 22 months. Usually, from last year to now, we would have played at least ten international tournaments. But due to the pandemic restrictions, we hardly got to play. The last time we played an 'international game' was in February 2020. Tuks played against the University of Bordeaux at home," Van der Merwe said.

"What complicated things, even more, is that we lost many of the senior players who in the past has helped Tuks to beat the national teams of other countries. So the challenge was to scout for new talent and then get them to understand the finer intricacies of the game.

"That is why I am so excited about what we have achieved over the weekend. The team made up for what they lacked in experience with pure guts over the weekend. Everyone really put their bodies on the line. These heroics led to quite a few serious injuries. By the time we got to play the last game, we only had ten players left who could still take to the field.

"The rules also changed. It was decided that the team with the best points difference would be the overall winner. So I have told the players to go for 'maximum' when we play against Makerere University. They did. We won the first game 25-0 and the second 34-0. The scores were not quite a true reflection of what happened on the field. The Makerere 'girls' relish any opportunity to go for big tackles.

"Both our two games against UJ were humdingers. We won the first 7-5 while they got the better of us in the second game, winning 10-5, but because we had the better point difference, we ended up being the tournament winners.

"Our captain, Sesihle Maguga, impressed with the way she led by example, even after injuring her wrist. Kirsten Eastes was, without a doubt, Tuks's best forward. Our 'Iron Lady' Miche Pretorius might be one of our smaller players, but it is not always size that matters. Despite taking some hard hits, she kept on running hard every time she had the ball in her hands."

Van der Merwe's reference to "Iron Lady" has to do with Pretorius also being a passionate triathlete.

If nothing unforeseen happens, Van der Merwe hopes that the Delta Drone Tuks team will play in Dubai in December. The South African 100m record holder, Carina Horn, might just play for Tuks. If she does, she will definitely be one of the fastest in Dubai. There are not many 7s players who can claim to have run 10.98s. 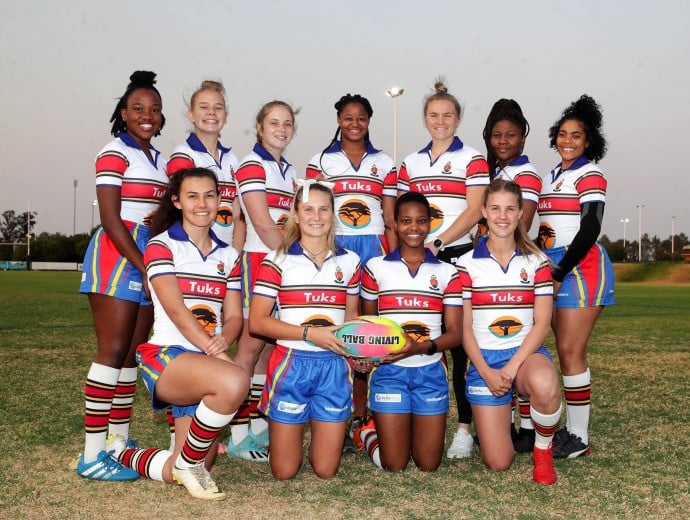