#TuksFootball: “We fight together, win together and lose together.” says Nhlanhla Mabaso after their Varsity Football semi-final defeat

The TuksFootball team might be down and out for the moment after losing 2-1 last night to Kovsies in the Varsity Football tournament semi-final, but it will be a mistake to write them off.

"When you play for Tuks, you always believe that we are going to make it all the way. It is what sport at Tuks is about. We fight together, win together and lose together. Last night’s loss against Kovsies is only a minor setback for a major comeback," said Nhlanhla Mabaso, one of the team's elder statesmen.

He scored a brilliant goal for Tuks when he headed the ball into the back of the net in the third minute. It meant that Tuks was in the lead for a few minutes.

Kamogleo Macholo scored the equalising goal in the tenth minute. Kovsies made sure of their spot in Monday's Varsity final after Tuks conceded a penalty in the 51st minute. It was Kovsies captain Thabo Lesibe who made no mistake.

From a statistics perspective, there was not much to choose from between the two teams. Tuks had 12 attempts at goal and Kovsies 11. The difference was that Kovsies was on target with seven while Tuks only with four. Kovsies also had a slight advantage when it came to possession.

"There is not really much I can fault the team on. Mind you, this is one of the youngest Tuks teams to play Varsity football. Still, these young players fought for each other and Tuks's honour every time they took to the field. We were like a "Band of Brothers going to war. Nothing deterred the 'young ones' even when many had written us off."

"Unfortunately, we did not make it through to the final. But this I can promise we played our hearts out until the very last minute," said Mabaso, who made his Varsity debut in 2018.

For the Master's student, Lebohang Montueli, it is the end of an era. The game against Kovsies was his last in Varsity football. From next year he is too old to play. He has been playing for Tuks since 2017. Tuks ended up being the Varsity champions that year.

"We really wanted to win. Unfortunately, it was not meant to be. I am so disappointed, but I don't wish to dwell on what could have been as that might 'destroy me'. We went to the game focused and ready, but Kovsies were the better team on the day. I wish them well for Monday's final.

"Since this was my last Varsity Football tournament, I would like to thank the Varsity Sports and TuksFootball for allowing me to play and express myself as a player. I am in tears not only because we lost but because of how this 'platform' changed my life. I will be forever grateful.” Montueli said. 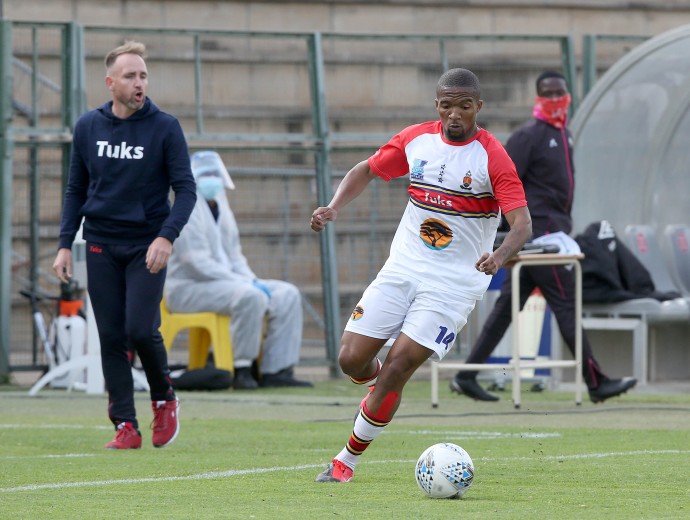