#TuksFootball: Tuks clash against their rivalry, TUT, in the opening match of the 2021 Women’s Varsity Football in Pretoria

If Tuks women's football team can have one wish come true when they play TUT in their first Varsity encounter on Wednesday, it will be that no one gets injured.
During the 2019 edition, their whole campaign got derailed in the first game when the Tuks captain, Thalea Smidt, tore her ankle and knee ligaments against TUT.
The current Tuks captain, Morongwa Manamela, who made her Varsity debut that day, said Smidt's injury was a "mental knockdown" for the team.
"We could not cope in our second game because our emotions were all over the place."
Manamela is undoubtedly one of the players to watch during this tournament. She is a versatile, two-footed footballer who thinks on her feet. Often it leads to her changing the outcome of a game. She is also a great passer of the ball. She captained South Africa's under-17 and under-20 teams.
Playing football is to Manamela not only about helping teams to win.
"Football is 'God's gift' to me. So it is important to me to showcase my talent. But I also need to use it to inspire those who might have had severe setbacks in life and therefore can't play football. It is important to me to try and 'inspire' them through the way I play."
The Tuks goalkeeper, Mapaseka Mpuru, is another international player. In 2019, she was part of the Banyana squad for the FIFA Women's World Cup in France.
She views being a goalkeeper as an honour. It often entails being the last player standing between defeat and victory.
"A good goalkeeper must be able to pre-empt what is going to happen and react within mere hundredths of a second. If you don't, it could be game over. You also got to be tactically savvy as you are the one player that can see how the opposition's attack might play out. So you got to direct your teammates to counter in advance. All of this is exhilarating."
Tuks coach Maud Khumalo is a firm believer in taking it one game at a time.
"Our team is relatively inexperienced. For most of the players, it is going to be their first experience of playing Varsity football. So the biggest challenge is to make sure they play collectively as a team. They should know when they step onto the field, we don't use names. There are only 11 players with one goal. That is to play good football.
"The Covid Pandemic made things challenging. But somehow, we managed to keep on training. We often played against under-15 boys teams as I wanted to get the 'girls' out of their comfort zone.
"As far as team tactics are concerned, I am a firm believer that the players should be able to adapt to what happens on the field. The first few minutes of the game should be about sassing out our opponent's strengths and weaknesses. Only then will we decide on a game plan."
Khumalo used to be an outstanding player herself. In 2000, she was selected for Banyana Banyana, playing alongside legends such as Portia Modise and Makhosi Ntuli. The team went on to win the COSAFA Women’s Championship. She also played the Women's Africa Cup of Nations.
The Women's Varsity Football tournament is also being played in a bio-bubble format at Tuks.
- Author Wilhelm De Swardt
Share this page
Published by Bhekani Ndebele 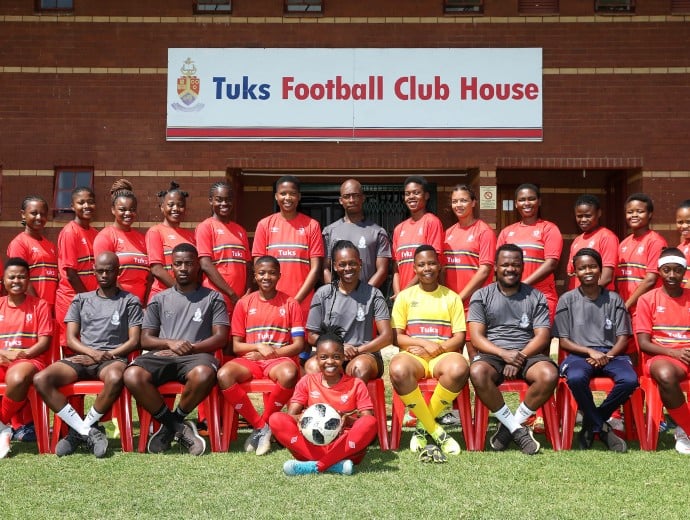