To win any title in any sport is considered an outstanding achievement; to win twice on the same day in the same sport is impressive. The TuksHockey teams were impressive at Wits.

Possible for the first time, the Tuks men's and women's teams were crowned USSA champions on the same day.

The Tuks women were involved in a humdinger against Maties. At full time the teams were level on 2-all. It meant there had to be a penalty shootout to decide who wins. Tuks won 4-3. The Tokyo 2020 Olympian, Onthatile Zulu, clinched the game for Tuks with the final shoot.

Tuks men’s team were dominant from the start against Varsity College (Durban), winning five-nil in the final.

Zondi, who is the Head of Programme & Head Coach at TuksHockey, described it as a great day for the TuksSport Club.

"It was special to win in what we call the return to university hockey for us. We will hold these victories to our heart as the last 18 months had genuinely been challenging due to the Covid Pandemic."

Zondi heads the Tuks women's team said each of his players impressed him during the tournament.

"So, winning the final is a just reward for the effort they had put in."

It is not the first time that the 21-year-old, Zulu, stepped up playing for Tuks. She was the Player of the Tournament when making her debut for Tuks in Varsity hockey in 2019.

Playing as a striker Zulu is not one to claim personal glory.

"It is the midfielders who actually make us as strikers look good as they are the ones setting up scoring opportunities. Our only challenge is to be in the right spaces to capitalize on the scoring chances."

Zulu played four games for South Africa at the Tokyo 2020 Olympics. According to her, none of her achievements as a hockey player would have been possible if it was not for her mom, Francina.

"My mother is a huge role model to me. She had to work hard for everything she had achieved. If it was not for that, I would not be able to play hockey. She made my goals possible by believing in me from the start.

"The most important thing she taught me is that through perseverance, you can do anything." 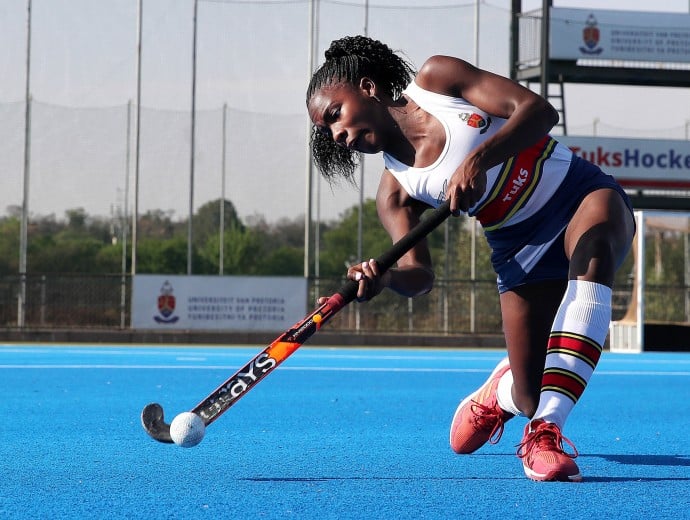