The South African rugby legend, Victor Matfield, recently showcased at Tuks that a good lock never loses their skills. "Old age" only means it might just take slightly longer to get the muscles working.

The 43-year old was one of six guests who shared their knowledge of the game with Tuks's Varsity Cup team. It fits in with the team's 2021 campaign slogan of "Champion people who are world-class".

"Our aim was to get some of the Springbok 'greats' to explain what it takes to excel at the highest level," Nico Luus, Tuks head coach said.

It was not all serious. Matfield told an anecdote of the only time he played hostel rugby at Tuks. Every time there was a lineout, he could hear a spectator calling out, "throw at number 11."

He figured out it was a reference to him. Still, it remained somewhat puzzling as he was wearing the number five-jersey. Only later on, he found out that it had to do with his skinny legs. It apparently resembled the number 11.

During the "serious stuff" talking lineouts, Matfield got so passionate that one stage, he took off his sweat track pants and lined up against the Tuks locks. He lost out on winning the ball on the first two throw-ins, but then his muscle memory kicked in. He won the ball with ease towering out above his much younger opponents.

While coaching, Matfield reiterated that it is doing the small things right makes a big difference in the end.

"I miss rugby so much, so it was great to be back at Tuks. It is where it all started for me," Matfield said.

He encouraged the young players to make the most of their opportunities to play in the Varsity Cup tournament.

"In 2019, it was the second-biggest local tournament in South Africa, so it is an excellent opportunity for young players to showcase their talents.

"But what makes the Varsity Cup tournament genuinely unique is that players also have to study. It is essential that they do. No rugby career lasts forever. Players need to be ready for life after rugby so they can face up to the challenges of the real world as well."

According to Luus, all six guests were genuinely inspiring.

"The moment they start talking rugby, it is easy to understand why they achieved what they did. Fourie du Preez's knowledge of rugby is unbelievable. He is still, without a doubt, one of the best tacticians of the game.

"Wynand Olivier inspired our backline players talking about what it takes to be a good centre. It is not only about running straight lines hoping no one tackles you.

"Willem Alberts told the story of how he never managed to play for Tuks's first team. He played for the Fezelas, but he never forsook on his dreams. It actually motivated him to work harder on his game. He ended up playing 43 tests for the Springboks. I think quite a few players took encouragement from his story.

"Morne Steyn made tactically kicking sound so easy. I hope what he explained would be taken to heart by our players. Richard Bands remains one of the most knowledgeable coaches when it comes to the tricks of the trade to dominate the scrums." 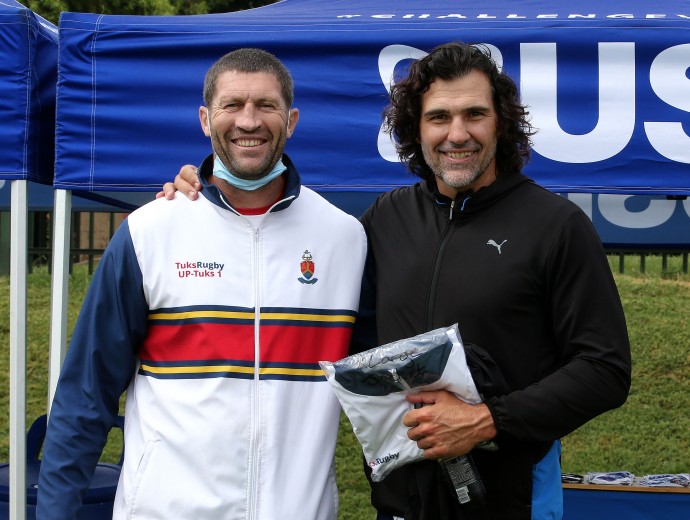