During the South African Short Course Championships (25m pool) in Pietermaritzburg, it was a case of the Tuks swimmer being faster each time she dived in. The end result was three new Africa as well as South African records (50m-, 100m- and 200m-breaststroke).

She started her "blitzkrieg" by twice setting new records in the 100m-breaststroke. In the heats, she swam 1:04.38, but she was only warming up. Her time in the final was 1:03.89. It was mission accomplished because Schoenmaker's goal was to dip under 1 minute and 4 seconds.

Last night she won the 200m breaststroke in a time of 2:18.02. It is the second time in four weeks that had broken the record. In September during the trials in Pretoria, her winning time was 2:18.20.

Schoenmaker qualified in all three events to compete at next year's World Short Course Championships (15-20 December in Abu Dhabi). She is not the only Tuks swimmer to do so. Kaylene Corbett swam a time of 2:22.43 in the 200m-breaststroke qualifying as well.

Schoenmaker topped off a brilliant campaign by swimming 30.20s in the 50m-breaststroke which is another record.

Rocco Meiring (TuksSwim head coach) admits to being pleasantly surprised. He apparently never expected Schoenmaker to break any records. A week before the national championships Meiring was worried that the swimmers he coached might be overtrained.

"I would be happy with whatever their results are."

Schoenmaker and Corbett were not the only two Tuks swimmers to impress. Judging by his results, the 16-year old Pieter Coetzee could be a champion in the making. He has won the 50m as well as the 100m-backstroke events and was second in the 200m-backstroke.

The youngster seems to be a "man" for the big moment. He predicted he was going to medal not being fazed that most of his rivals are older, stronger and more experienced. His winning time in the 50m-backstroke was 24.08s. He won the 100m-backstroke in 52.55s and clocked a time 1:55.98 in the 200m-backstroke.

"I am going to Pietermaritzburg to win medals, and I want to see how close I can get to swimming the World Short Course Championships B-qualifying times," he said two weeks before the national short course championships.

Coetzee proved to be true to his word. He swam B-qualifying times in all three the backstroke events. He is confident of being even faster.

"I definitely can work on improving my start, as well as my underwater turns," said Coetzee.

Last year as a 15-year old won the 100m-backstroke during the national short course championships and was second in the 50m-backstroke.

The 18-year old Duné Coetzee, no relationship to Pieter Coetzee, impressed by winning the women's 200m-butterfly in 2:13.99 it is faster than B-qualifying standard for the World Short Course Championships.

The Tuks swimmer also won the 400m-freestyle in a time of 4:07.95. What was impressive about her performance was that managed to beat Schoenmaker who was second in 4:09.33. Coetzee missed out being faster than the A-qualification standard by a mere second.

"I was not really focussed on swimming fast times as I had not tapered for the championships. My only goal was to test myself to see what I am capable of at the moment. Due to the national lockdown, it has been a while since I had an opportunity to compete."

The Tuks swimmer was second in the 200m-freestyle setting a new personal best time of 1:58.76, which is faster than the World Short Course B-qualification standard. 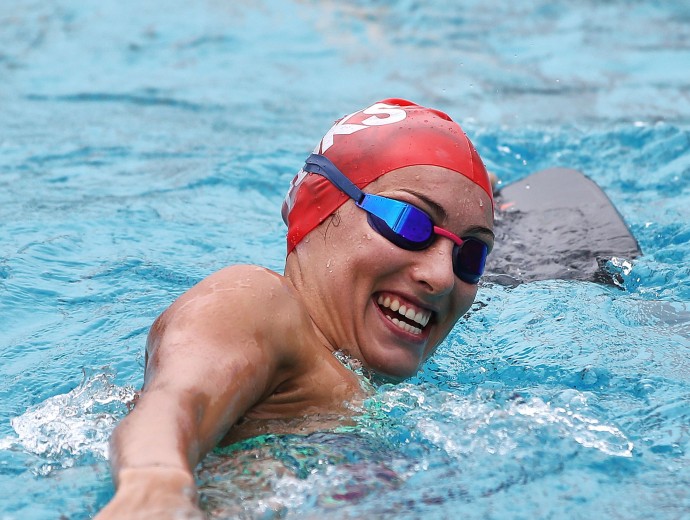