#TuksCueSport: Tuks players are serious about being the best at blackball

Most people might associate playing pool as having a good time with friends drinking a few beers and generally just joking around, but this is a perception that the TuksCueSport Club wants to change.

For them, it amounts to sacrilege to refer to their sport as a “dirty bar game”.  David Malangu who took the initiative to get the CueSport Club started at the University of Pretoria explains that to be good at playing blackball takes the same discipline and skills as it would a good golfer.

“It is 100% about technique and mental toughness. If you lose focus, you will lose the game. It is that simple. Blackball is essentially a game of process. You got to have the right stance. Your feet should be aligned with the ball, and then you got to align your hips and shoulders to be able to execute your approach to the ball to perfection.  The stroke is of utmost importance.

“I aim to ensure that within the next two years Tuks will be one of the best cue sports clubs in Gauteng if not South Africa. Watch this space, as they say, pool is still going to become an Olympic sport,” said Malangu with the utmost of confidence.

To emphasise what Malangu said about Cue-sports being a real sport for true athletes Daniel Coetzee casually mentions that Ronnie O’ Sullivan an English professional snooker player recently achieved his 1000th-century break. That requires scoring 100 or more points without missing a shot. It boils down to potting at least 25 consecutive balls.

“It is an unbelievable achievement,” said Coetzee who can’t help but get excited when he starts talking about the skills of O’ Sullivan.

According to Coetzee he always played pool, but at first, it was merely for fun. However, everything changed when last year he watched a video of the Mosconi Cup Tournament which is viewed as one of the most prestigious tournaments in the world.

“I truly got inspired by watching the professionals who seem to miss a shot hardly ever. The way they were able to control the ball was unbelievable. Seeing them in action made me realise that pool is not just a dirty bar sport. The guys I had watched were real athletes. It made me decide I want to play like them and thanks to David’s vision it is now possible for us as Tuks players to train properly."

Malangu made an arrangement with the  Corner Pocket Bar & Billiards that the Tuks players are allowed to train in the mornings between 10:00 to 12:00. He even helped to identify a coach who will help players to fine-tune their technique and to understand the finer intricacies of the game.

There is also an internal league which allows the players to get used to playing at a competitive level. At the end of the year, Tuks will be competing at the USSA Tournament for the first time. 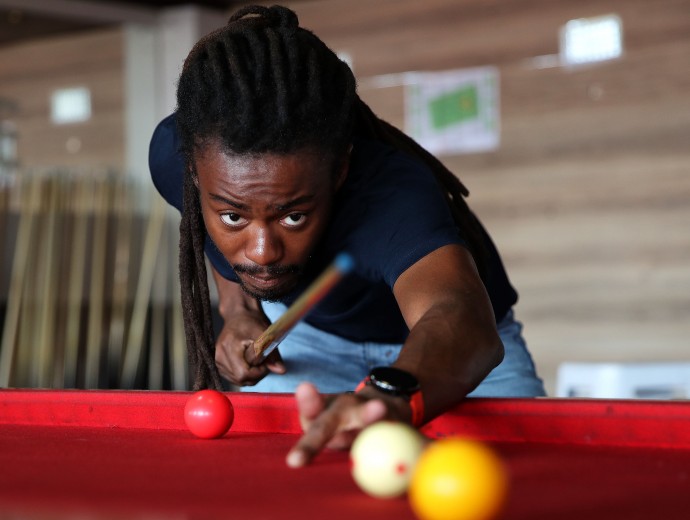