The Department of Physics hosted a highly successful postgraduate interdisciplinary course on solar energy and photosynthesis at the University of Pretoria (UP) during the October recess. This unique course, which was presented for the first time in South Africa, attracted student participation from six different departments at UP – Physics, Chemistry, Genetics, Microbiology, Plant and Soil Sciences, and Mechanical and Aeronautical Engineering. Although the course was intended mainly for UP students, two students from the University of the Witwatersrand and one from CEA-Saclay in France also participated.

The broad course topic was investigated from various angles, aligned with the expertise of the lecturers, who are based in the Departments of Physics (Tjaart Krüger, Mmantsae Diale and Michal Gwizdala), Chemistry (Shankara Radhakrishnan and Emil Roduner) and Genetics (Steven Hussey and Eshchar Mizrachi), giving the course a true cross-disciplinary flavour. The University also welcomed a number of leading international scholars as guest lecturers: Rienk van Grondelle (Department of Biophysics, Vrije Universiteit Amsterdam, the Netherlands), Emil Roduner (Institute for Physical Chemistry, University of Stuttgart, Germany), and Bruno Robert and Diana Kirilovsky (both from the Institute of Biology Technologies, CEA-Saclay, France). Van Grondelle, Roduner and Robert presented well-attended public lectures on stimulating topics at Sci-Enza (the University's science centre). The French Embassy in South Africa funded the visits of the French scholars by way of the Protea Research Programme and is also generously sponsoring the best student for a research internship in France.

After starting the course with a brief introduction to the quantum-mechanical basis of light-matter interaction, the in-depth workings of various photosynthetic organisms and numerous types of semiconductor and chemical solar cells were explained. Strategies for redesigning photosynthesis were discussed on the last day, based on the principles of synthetic biology and bioengineering. Finally, Kittessa Roro from the CSIR Energy Centre enlightened attendees with a bird's view on the South African solar industry. Several students indicated that the multidisciplinary focus of the course was the most valuable aspect for them.

A range of assessment activities took place during the lecture week, all of which were based on preparatory activities during the weeks preceding the course lectures, in a typical flipped class style. All participants were required to study a collection of research papers and articulate one non-trivial question per paper. Each question was to be answered by two other students. This level of preparation encouraged the active participation of all students. The questions and answers were then discussed and evaluated during the various discussion sessions. The international guest lecturers were the leading authors of some of the research papers published in top-ranked scientific journals such as Nature and Chemical Society Reviews.  Each student was also assigned the task of summarising and critically evaluating two research papers by means of a short presentation in the presence of all participants as well as in the form of a written report. This activity was aimed at improving their work readiness, as well as improving their scientific communication skills, which are some of UP's graduate attributes. All students enthusiastically took part in these activities and the international experts were impressed by the high level and active engagement of the students.

Within a few weeks after announcing the course in a few departments at UP, the limit of 30 student participants was reached. This relatively small number enabled active interaction among all participants. The level of interest in the course emphasises the demand for multidisciplinary courses at UP and provides impetus for making this particular course an annual event. The organisers are also considering broadening the scope of the course to include system and cost analysis of new technologies in the solar industry, which could attract more engineering students.

Almost without exception the student participants mentioned that they wished they had the opportunity to take this course for credits, for example as part of their bachelor's degree. As the Physics Department is currently the only department in the Faculty of Natural and Agricultural Sciences offering postgraduate elective modules, the organisers appealed to other departments to seriously consider crafting strategies to enable and encourage multidisciplinary courses in their departments. Multidisciplinary research is the future and UP can and should take a lead to drive South Africa towards this goal. 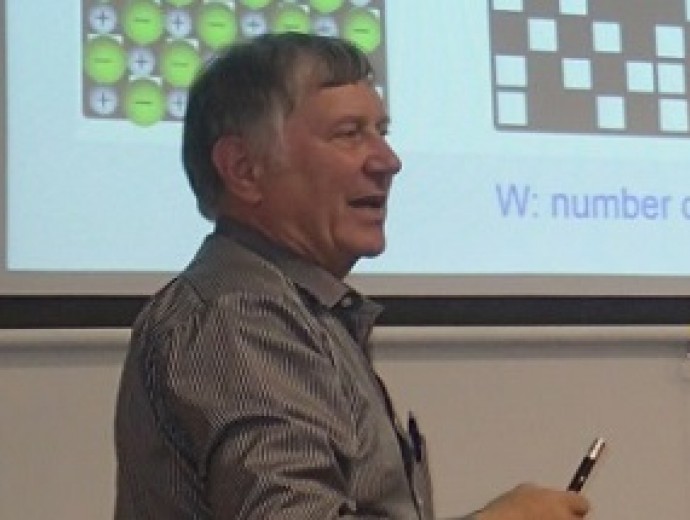