As the shadow of food insecurity is refusing to disappear in Malawi, a South African based florist has tipped the country to revamp its idea of investing in the cut flower industry as this has the potential to augment tobacco farming, the main forex earner.

Cut flowers are flowers or flower buds, with some stem and leaf that have been cut from a stem bearing it. They are finally sold on more competitive price and buyers often use them during events like weddings, funerals and other purposes.

But despite the lucrative international market, the Malawi flower industry stopped blooming for about two decades now.

The flower industry is, however, being seen as a major option to help turn the tables around.  The latest Malawi Vulnerability Assessment Committee (MVAC) showed that a total of 1 062 674 people, out of the total estimated Malawi rural population of 14 747 257 will not be able to meet their annual food requirement during the 2019/20 consumption period. This is just one of the many scenarios that the country has been seeing itself in, over the years but a lasting solution has not been identified yet.

Flourburgh, a flower farm located by the roadside in Waboomskrall in the township of George in Western Cape, South Africa, offers the finest platform and best learning ground in the development of a vibrant and commercially viable flowers industry.

Kemp Myburgh is the owner of this farm, and he shares his experience to our reporter, in which he points out that Malawi is currently losing billions of money some of which could be used to alleviate the hunger in the country. Economic benefits to be earned from Forex on the exportation of the flowers could be huge and benefit poor farmers. May you introduce yourself and tell me the background of this flower venture that we are seeing? Possibly you can also mention some of the flowers that you grow.

I am Kemp Myburgh and we bought this small farm (25Ha) some 18 years ago and by then it was infested with alien vegetation. It took me a really long time to clear it and I had many ideas that I wanted to implement. But because of the fact that I had a fulltime job – which was necessary to clear the land and limit crippling loans but which only left me with weekends to work on the farm, the relatively small size of the farm and very little water prospects such as Chicken farming, essential oil production and cash crops would either be too costly to start and maintain or would simply not be suitable.

I knew that whatever I did, it had to be a niche product on a smaller but intensive scale to be viable and that is where the cut flower industry really stood out. I love nature and all around are Proteas in all forms. They are endemic and grow naturally so it wouldn’t require too much input. I would also be able to do this step by step to limit large expenditures all at once. I started off on relatively small scale with King Proteas, Pink Ice, Safari Sunset Leucadendrons as well as Rigoletto Pin Cussions and Veldfire Pin Cussions (Leucospermums). Proteas, Leucospermum and Leucadendrons are all genera from the Proteaceae family.

In your own view, how do you think is this farming contributing to food security here in South Africa?

Definitely. The cut flower industry although not food is very labour intensive and supplies more work than even most agri- business to men and women from all ages. The ability to add value with dried flowers and bouquets are also very viable options. Proteas are very sought after over the world because of their exotic forms and very long shelf life. They, however, flower in different seasons so it was important for me to have a number of varieties to fill my year. People will always want and need flowers.

Malawi is one of the countries that have not taken floriculture seriously. As a practising -florist, what would you say on how much is Malawi losing in a year for not taking the farming on a commercial scale?

The flower market in Johannesburg spans 50 000m2 where thousands of flowers are sold on auction per day. Even this place pales in comparison to the Dutch auction in Aalsmeer which exists for more than 100 years where buyers and sellers from all over the world converse in their numbers. The echo tourism brought about by the flower industry is definitely an added bonus. So in my view, not only money but also incidental opportunities related to the cut flower industry are lost. There is a whole industry that is built around the logistical requirements for packaging and transport.

Tobacco is the main forex earner in Malawi. Would you comfortably recommend Floriculture and how long can it take before Malawians can start reaping the fruits of their sweat in the event that they venture into this kind of farming?

Absolutely, the cut flower industry can augment rather than replace tobacco farming. If proper soil testing, weather and climate factors are duly considered whereby cultivars can be identified followed by soil preparation and infrastructure plants start flowering after 3 years. The industry in South Africa is very well organised and “cross-pollination” can easily be arranged whereby leaders in our industry will be keen to share ideas and experiences

Agri -business and food security is definitely not only about farming with food albeit fruit, vegetables, meat or grain. It is the ability to use soil optimally. Subsistence farming does not provide a wide array of jobs and the cultivation of skills. For me, the niche market of Proteas brings about a wide array of abilities and skills

What is the secret behind drip irrigation in South Africa, a system you also use in this farm, but absorption is very little in Malawi?

Drip irrigation is about the effective use of water an extremely scarce resource. It puts the water where the plant needs it – at its roots at a specific amount for an exact time, thereby you know exactly how much water is given to each plant and it makes planning so much easier. Plant nutrition can also be brought to the [plant directly very efficient with drip irrigation. Sometimes when spraying water that water stays on the leaves which can lead to secondary damage of the leave or of a residue that may affect the stem.

Status of the Cut Flower industry in Malawi

Godfrey Mfiti, an Environmental Rights Activist and Author, who owns Nthaka Poultry Farms Limited a company in Malawi that is country developing its organic fertilizer for Malawi market made from Rabbit Waste and other organic materials highlights that the current status of Cut Flower industry in the country is very low. “Floriculture is a niche that has not been explored in Malawi. Local farmers have not realized the potential benefits of the industry to ease the economic challenges they face. Floriculture, being a low input agriculture farming system would gradually replace the loses being encountered in the Tobacco industry that is slowly not benefiting a lot in Malawi in terms of income. Little has been done to impart knowledge to local farmers in Floriculture in Malawi. The industry would represent an extra source of income for families to procure livestock and other basic necessities including education of their children.” Adds Mfiti.

So does Malawi have the best soils for floriculture?

According to Bello Shano, the Soils Analyst at Agrilab, a subsidiary of Farming and Engineering Services in Malawi, the country has suitable soils for flowers, of which each region has certain types of flowers which can do well in it. The analyst points it out however, that one needs to be clever in selecting what flowers to grow where.

“You just have to do research and choose the suitable flowers that thrive in your environment (considering soil type, rainfall, temperature, humidity, etc). In terms of soil, some flowers are a little fussy about soil types and pH but in general, most plants are happy with good quality topsoil”, explained Shano.

On chemicals and fertilizers used in flowers

Shano further discourages Malawians wherever possible avoid using chemicals and if they are used, safety precautions should be followed. Excessive use of fertilizers can also lead to problems such as making the soil more acidic thus unsuitable to most plants according to soil scientists. He points out that in most cases using organic manure is usually safe and adequate in the production of flowers.

Malawi’s Ministry of Agriculture, Irrigation and water development spokesperson, Pricilla Mateyu was not handy to give a comment despite several attempts.

Despite the booming of the flower market on the international market in recent years, the Malawi business sector is yet to break into such a market. The fall of the Lingadzi farms in early 2000 is an epitome of how the flower sector has failed to flourish. It was the closure of the farms that marked the erasing of Malawi flowers at the international market. At the time of its closure, as reported by the African Magazine of December 2000, Lingadzi was the country’s largest flower grower and exporter –exporting an average of 20 million stems of roses a year – with over 700 workers. The closure of the farm saw Malawi losing US$ 28 million in revenues. 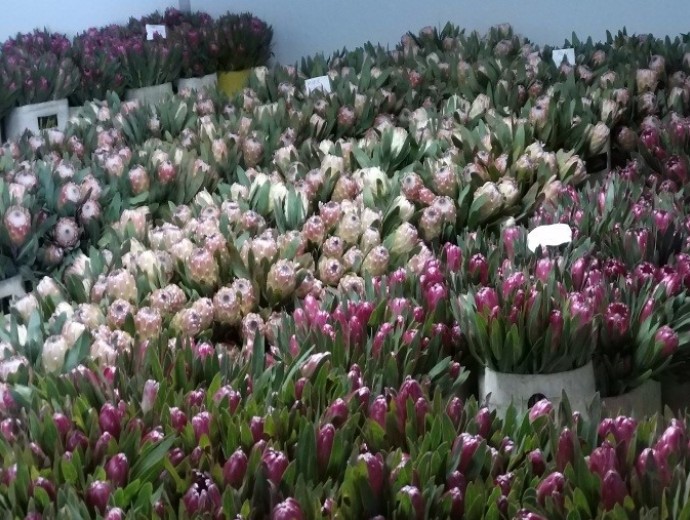