UP academic, ‘a fighter against hunger'

Hunger is on the rise again worldwide, despite the rapid progress needed to achieve the United Nations’ Sustainable Development Goal (SDG) 2, which is to end hunger, achieve food security and improved nutrition and promote sustainable agriculture.

Currently, one person in three is malnourished and, if current trends continue, one person in two could be malnourished by 2030. There is ample evidence available on the imperatives to reduce malnutrition and the cost benefits of acting versus not acting. However, far less is known on the practicalities of how to achieve action at scale and leveraging the financial and human resources to leave no one behind (as the SDGs promise).

This view was presented by the University of Pretoria’s Dr Moraka Makhura, as project team leader of the Committee for World Food Security’s (CFS) High Level Panel of Experts on Food Security and Nutrition (HLPE), in Rome recently. The Senior Lecturer in Agricultural Economics and Co-Director for the Collaborative Centre on Economics of Agricultural Research & Development, presented the findings of the first scientific report (13th Report on Multi-stakeholder partnerships to finance and improve food security and nutrition in the framework of the 2030 Agenda) on this goal.

According to the Report: ‘Multi-Stakeholder Partnerships (MSPs) is an emerging mechanism to facilitate such large-scale action across sectors and inclusive of all stakeholders in development practice. The complexity and multi-dimensional nature of food security and nutrition (FSN) requires cross-sectoral and holistic approaches and the pooling of resources, knowledge and expertise of different stakeholders. MSPs present a new approach to the governance of FSN.’

Previous HLPE reports called for radical transformation and suggested possible pathways to progress towards more sustainable food systems, at different scales, to address the multiple burdens of malnutrition. The reports, being commissioned by the CFS, synthesise a large body of scientific research and seek to provide policy guidance on these topics to the member states of the CFS. Since the inception of this science-policy interface mechanism in 2010, the HLPE reports have informed CFS discussions, changed public policy and influenced legal frameworks (notably on realising the right to food) in countries.

The previous reports covered 12 topics of global and national importance in the fight against hunger – and UP academics have been closely involved. Prof Sheryl Hendriks, Professor of Food Security, Department of Agricultural Economics, Extension and Rural Development, served on the maiden HLPE Steering Committee; and Prof Rashid Hassan, Emeritus Professor in Environmental Economics was a project team member for the 3rd HLPE Report on Food Security and Climate Change.

The current report is novel in that there was very little published research, opinion and knowledge on the topic. The writing team relied on the extensive input of the project team and HLPE experts, two open public consultations, peer review and a survey of MSPs to establish the working definitions of the terms, and to shape the conceptual framework and direct the recommendations.

The Chair of the CFS, Ambassador Mario Arvelo and representatives of governments affirmed the importance of the report, particularly the recommendation to establish a policy framework to ensure that MSPs effectively contribute to the progressive realisation of the right to adequate food. This will ensure that MSPs do not operate in a policy vacuum.  Ambassador Arvelo challenged members of the CFS to ‘step up and be a facilitator for the policy process that will follow the release of the report and its presentation at the CFS annual meeting in October’.

He said that ‘the presenter (Dr Makhura) can be counted as a fighter against the war we are fighting against the challenges that go beyond single answers – ending hunger requires collective efforts and strong partnerships to learn, reflect and have better targeted and coordinated actions’.

The report identified criteria to assess and improve MSPs performance. It also proposed six steps to follow for establishing MSPs, as well as an alternative financing mechanism.

Dr Makhura will present the report at the CFS annual meeting in October in Rome. 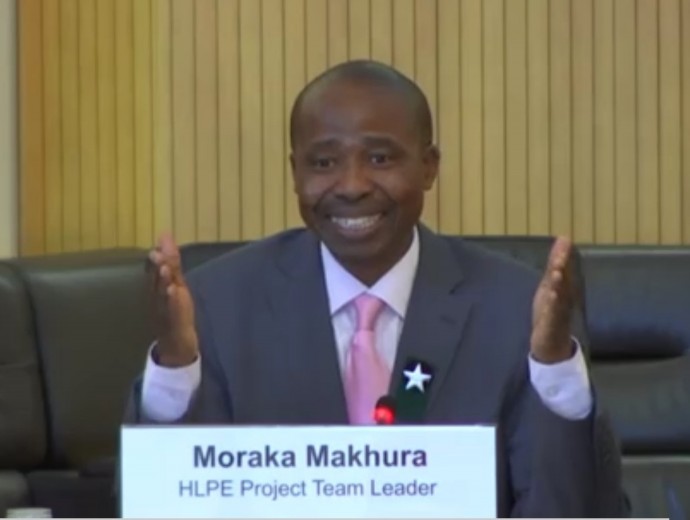