A ready-to-drink sorghum-cowpea beverage developed by four Food Science students from the University of Pretoria (UP), recently won them an international award. They received this award for the Best Presentation at the 18th International Union of Food Science and Technology (IUFoST) Food Science 'Students Fighting Hunger' product development competition, held in Dublin, Ireland.

The team called 'Shoki-Nwa', named after the ready-to-drink, on the go beverage, consists of four Food Science students, Olumide Adedara, Emmanuel Nekhudzhiga, Nanamhla Adonis and Tholoana Mokhele. The name of the product was coined from two words, 'Shoki', a Nigerian Yoruba word for 'quick' and 'Nwa', a South African Sesotho word for 'drink'.

The competition encouraged undergraduate students to use their knowledge and skills to develop innovative food products to fight hunger. Students were challenged to develop affordable high-protein (containing low to no meat), high-fibre, low-sodium products, based on regional raw materials and technologies.

The students developed the sorghum-cowpea beverage as part of their product development module during their honours programme in 2015. The product is targeted at school age children in South Africa, especially those from low-income families. The dynamic duo, Olumide and Emmanuel represented the team at the IUFoST Conference in Dublin where they presented it before a distinguished panel of judges, competing against eight other teams from Costa Rica, Singapore, the Netherlands and Stellenbosch University (South Africa).

Speaking about their achievement at the conference, Olumide said it was a wonderful learning experience, especially so, because this module which he regarded as just another module that had  to be passed, was being used to change and impact lives in other parts of the world. Emmanuel added that sharing knowledge with other researchers further developed his understanding of Food Science and that he will use it in his postgraduate studies. Olumide, Emmanuel and Nanamhla are currently MSc Food Science students at UP, while Tholoana is working in the food industry. The team hopes that with appropriate support and interest, they can further improve the product to make it commercially available in different shops in South Africa. 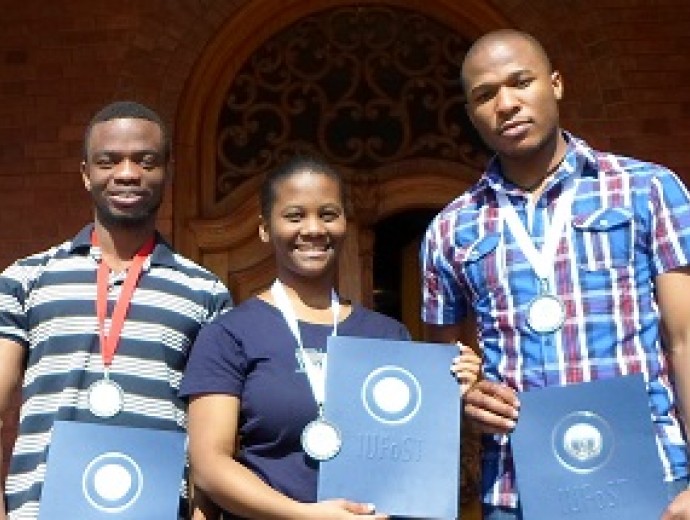