Could there be a single solution to Africa’s battle against poverty, hunger and unemployment? Master’s students, under the supervision of Prof John Taylor at the Department of Food Science at UP, have come up with a “super biscuit” that is rich in essential nutrients.

Protein-energy malnutrition (PEM) is a deficiency disease resulting from undernourishment, a common problem among children in developing countries. With nearly ten years of research behind them, the UP team has come up with a simple formula biscuit that contains nutrients essential for young children. The flour in the biscuit is made from nutritionally rich, locally grown sorghum to which cowpea is added, which enriches the protein content of the formula. Just two biscuits a day can supply up to 20% of a young child’s daily energy requirements.

An objective behind this study has always been to use only ingredients produced by small-scale food producers in South Africa, thereby creating business opportunities. The production of these biscuits may be a viable enterprise for small-scale food producers in the country and across Africa. Previously, students looked at biscuits made from sorghum and soya. However, soya is not commonly grown in Africa. Pam Dovi, a master’s student in the department, refined the recipe to a simple, low-cost formulation that uses cowpea as a substitute for soya. Cowpea is an African pulse rich in protein and calories and also contains minerals and vitamins.

Students from all over Africa have been involved in this research aimed at benefitting many rural communities across Africa. Students can make the formula known in their home countries, for instance Rwanda and Kenya, to address food problems there.

The aim is to provide the biscuit to children at schools. This biscuit has several benefits, including the fact that there are no preparation requirements as with other school meals and, because it is made with very little water (the product contains less than 3% moisture), it is not only nutrient dense, but also has a long shelf life. In addition, there is great potential for street vendors to sell the biscuit. Another aspect that could make the biscuit popular, according to Prof Taylor, is that food serves an aspirational function, and because children might regard ‘eating Western food as cool’, the biscuit could appeal to them.

The UP team tested the biscuit in a true market setting in Mamelodi, Tshwane, on the University’s Mamelodi campus. The biscuits were favourably received, especially in comparison to a cheap and basic “sugar and flour” biscuit, thereby affirming its viability.

Working in collaboration with the University of Limpopo’s Limpopo Agro-Food Technology Station (LATS), an initiative of the Department of Science and Technology, the team has been training small-scale entrepreneurs at the Howard G Buffett Foundation Ukulima Research Farm in Limpopo to prepare the biscuits.

Prof Taylor says the ultimate hope is that the biscuit will be endorsed by provincial governments for use in school nutrition programmes across South Africa because it has the potential to make a real difference. This simple biscuit meets the challenges of being easy to produce, having a high nutritional value, being favoured by the target group, combating hunger and its associated problems, and holding the promise of profitable small-scale production. 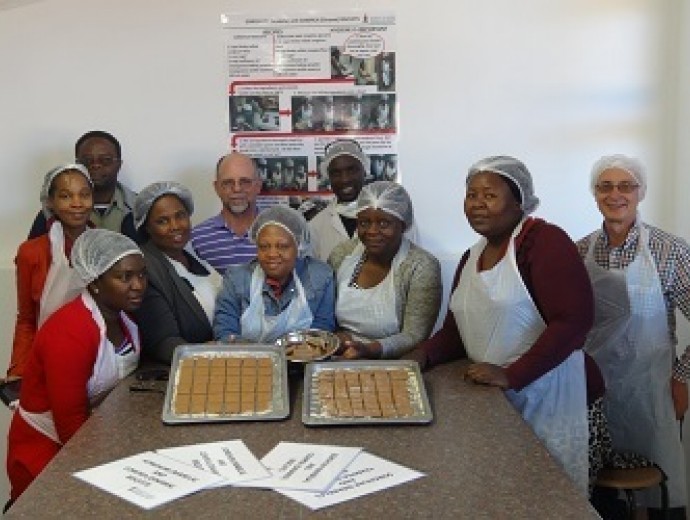 Postgraduate students involved in the development of the sorghum biscuits