Despite the global decline in new infections, the emergence of multidrug-resistant TB (MDR-TB), a virulent strain that has developed an immunity to the antimicrobial drugs used to treat TB, means the disease remains a public health crisis.

A key area of improvement is in the diagnosis of MDR-TB and TB expert Dr Nontuthuko Maningi, a researcher and senior lecturer in the Department of Medical Microbiology at the University of Pretoria (UP), is tackling this head on, along with her research team.

Current diagnostic tests are limited in the information they provide, and do not offer conclusive results on whether a patient has MDR-TB. Dr Maningi is looking for new resistant markers in the genes of the TB bacteria that are responsible for creating MDR-TB – and her findings are proving positive. Once these markers are identified, the development of improved diagnostic tests will become that much easier. “If we continue as we currently are, we will win the fight,” says Dr Maningi. “But we need to stay focused and deliver.”

MDR-TB is caused by the inaccurate administration of medication, the poor management and supply of quality drugs, and improper treatment, either by a healthcare system or by patients failing to follow their treatment plan.

While South Africa has been an example to the rest of the world in terms of TB prevention and care, the socioeconomic status of many citizens often contributes to the spread of MDR-TB – living in close proximity in informal settlements is way in which the disease is spread.

Until recently, it was assumed that drug-resistant TB was acquired only as a result of poor compliance to treatment. But studies have shown that its transmission from one person to another is highly likely – someone may be carrying MDR-TB without having yet developed symptoms and could unknowingly infect others, which has dangerous implications for their family and the community at large.

There are three types of drug-resistant TB. “The first, MDR-TB, is resistant to the two most powerful first-line drugs used in the treatment of susceptible TB,” explains Dr Maningi. “The second is a more severe form of drug-resistant TB known as extensively drug-resistant TB (XDR-TB); there are even fewer options to treat patients with XDR-TB successfully because the patient does not respond to second-line treatment.” Finally, totally drug-resistant TB (TDR-TB) is a new omnipotent strain that does not respond to any drug that is currently available. Hospitals in South Africa have little choice but to discharge patients who have TDR-TB because nothing can be done for them – meaning they go back into communities and the disease continues to spread. “TDR-TB is slowly spreading, and I fear we will wake up one day with a massive outbreak,” says Dr Maningi.

What is being done about it?

With a success rate of only 27% to treat XDR-TB and nothing on the market to treat TDR-TB, new drugs are vital. Dr Maningi adds that more work needs to be done on the treatment itself to shorten the duration that a patient is on treatment, thereby reducing the side effects experienced. Several countries, including South Africa, have introduced a short-term MDR-TB treatment regimen of 9 to 12 months. Even though the regimen has shown a treatment success rate of up to 87% in the groups that were put onto it, the treatment remains too harsh on patients, particularly the immuno-compromised, children and the elderly, and could be fatal.

In an effort to improve diagnostic measures, the Department of Medical Microbiology, under the leadership of Prof Bernard Fourie and in collaboration with other UP departments are going into areas where MDR-TB is likely to be present in order to track down individuals who may unknowingly be spreading the strain. “By engaging with communities, we find out about their symptoms and relatives who might be sick. With their permission, we swab their mouths in order to run tests in the UP lab.” Dr Maningi says that several positive cases have been found with this simple interactive method. Once results are confirmed, patients are advised to seek treatment at health clinics.

Together with her research team, Dr Maningi is working to develop new diagnostic tests to improve coverage to detect MDR-TB. In fact, her results are becoming sought after and have already been used by the Foundation of Innovative Diagnostics (FIND), a leading WHO agent that focuses on policy change and MDR-TB diagnostic research development.

Dr Maningi is clear about what is needed: new drugs, new vaccines and new diagnostic tests. 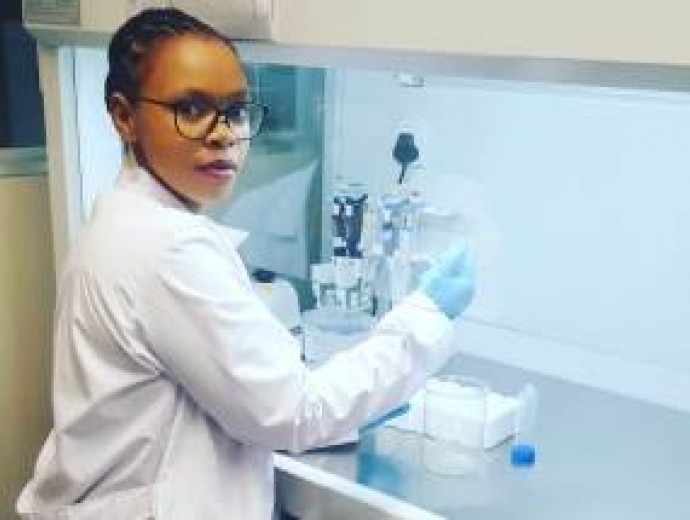