A lecturer who inspires and motivates students ... This encompasses Mr Carel Oosthuizen, the first-year co-ordinator for Animal Diversity in the Department of Zoology and Entomology who received the Best First-year Lecturer Award in the Faculty of Natural and Agricultural Sciences (NAS) on 2 December 2016.

'I am humbled by the Award and grateful to all the students who participated in this new initiative. I have a strong passion for lecturing and research. My motto regarding lecturing, especially to first-year students, is that all students have the ability to pass, and most likely to do well in their courses. The second part of my motto is that first-year students have a strong desire to learn and to be diligent, but that most of them do not know that when they enter university. This is exactly where my responsibility as a first-year lecturer lies. I endeavour to instil a positive attitude towards studying by teaching the students to be informed and to foster a culture of good habits right from the start of their studies. The learning approach that I follow is strongly based on self-regulated learning, thereby acknowledging that a learner's behaviour, learning environment and student self-motivation strongly affect learner achievement and success. The reason why I am using this approach is to, as from the first-year, create a culture of being an active learner who can manage his/her own learning by self-monitoring, self-motivation and strategy implementation.'

Mr Oosthuizen said: 'The approach used in my lecturing led to the exciting and successful implementation (as part of a team) of new teaching aids and technologies into the first-year classroom over the past five years. The biggest of these implementations were the successful use of clickers in the classroom. As part of the team, I received a certificate of Excellence for Teaching Excellence and Innovation at the University of Pretoria, for the lecturing approach followed in teaching Molecular and Cell Biology. I also implemented virtual classrooms, using Blackboard Collaborate, for immediate direct help with the course content, thereby maximising student communication and access to the lecturer. Part of implementing new technologies and strategies also include student feedback through surveys for informing and directing my current approaches and the development of new approaches. As part of my teaching approach, I believe that it is important to focus on the scientific method right from the start of a student's university career, with regular reference to my own research that is being conducted, as well as interesting relevant but extracurricular contemporary studies in the science literature,' Mr Oosthuizen said.

He is currently enrolled for his PhD titled, Genetic diversity and population structure of four marine fish species (Teleostei: Sparidae) along the Southern African coast, focussing on molecular phylogenetics, population genetics and conservation biology specifically in the aquatic environment. 'Fish have for long been the main resource exploited from the aquatic environment and extraction has caused a number of undesirable results, such as overexploitation and the threat of extinction. I am interested in identifying the evolutionary processes that have shaped the genetic diversity, its distribution and the patterns that can be observed today,' Mr Oosthuizen concludes.

Mr Oosthuizen also received a floating trophy, branded by NATHouse, as well as a cash prize and a certificate from NATHouse.

This Award was initiated by the Faculty's student house, NATHouse, and specifically by the previous Chairperson, Alexis Schultz, to recognise the extra effort that the first-year lecturers put into their teaching and learning activities. According to Dr Quenton Kritzinger, guardian of NATHouse, 'their efforts are really appreciated by the students and this Award serves as an encouragement for the lecturers.'

A great word of thanks to the 2016/2017 Chair, Ms Nosihle Msomi, as well as the Executive Committee members of NATHouse for their efforts with the arrangements (among others marketing, acquiring the nominations, the voting process) related to the Award.

Voting by all NAS undergraduate students took place between 31 October and 12 November this year and more than 20% of the registered first-years in the Faculty voted for their favourite first-year lecturer via ClickUP. This was really exceptional as the students had limited access to campus due to the protests. 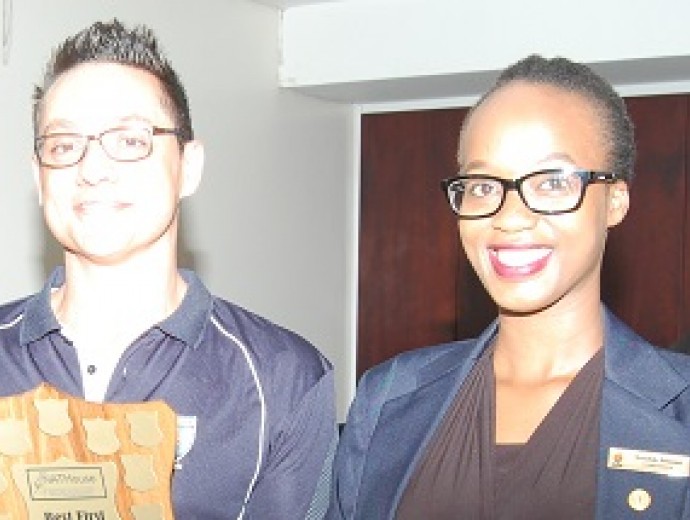