UP veterinarians do their part to save our rhino

As the rhino poaching crisis escalates, this year’s theme for World Wildlife Day, ‘The future of wildlife is in our hands’ is a chilling reminder of the situation in South Africa. The reality is that there are just too many destructive hands causing the wild rhino population to plunge.

Wild rhinos are being poached in order to meet the demand for the world’s most expensive commodity – rhino horn. People in countries across Asia use rhino horn as a status symbol and for the health benefits they incorrectly believe it to possess.

While millions of rands are pumped into anti-poaching campaigns, it is often difficult to determine how the money is spent and conservationists working in the field constantly struggle to find funding. Some still seem to find it difficult to comprehend that if we lose rhinos and other iconic species, South Africa loses its heritage.

The University of Pretoria (UP) has some incredible people involved in the protection and conservation of iconic species. The pool of knowledge in the Faculty of Veterinary Science, for example, makes UP a direct point of contact for people needing assistance when treating sick or injured rhino. These researchers are also dedicated conservationists who apply the results of their studies directly in the field, to the benefit not only of the rhinos, but of other conservationists too.

UP veterinarian and one of the founding members of Saving the Survivors,* Johan Marais is one such researcher. Regarded as one of the best rhino surgeons in the world, he has worked on many rhinos that have fallen by poachers’ hands – often being forced to conduct surgical procedures that have never been attempted before. Marais is giving everything he possibly can to save this species from extinction. The knowledge he gained during 20 years of working on horses is particularly helpful when attending to wounds and fractures in rhino.

Cases that Marais and his Saving the Survivors team have to deal with are often very complicated. ‘Over the last few years, I have had to learn to perform surgery and dress wounds in such a way that there is no need to have contact with the animal for at least two to four weeks.  It is quite challenging; it forces you to think outside the box and come up with new and innovative ideas and treatments,’ says Marais.

Marais has been faced with cases that are emotionally very challenging and often seem hopeless. In their dedication to saving this species, the likes of Marais and his colleagues apply all their knowledge and passion, often managing to do the seemingly impossible.

Hope is a four-year-old female white rhino who had her face mutilated by poachers last year. She was left in the veld to die. Thankfully, she was found and Marais was brought in immediately to do everything he could to save her. Treating the gaping cavity was not a straight-forward procedure and would require innovative planning.

Marais placed a shield over Hope’s wound and she has undergone several procedures over the past few months, with constant monitoring of her health and regular blood tests. Marais and his team recognised that they would have to use new technology to build her new face. They contacted biotechnology company Altis Biologics to assist them. The idea was to use collagen sheets inserted into the living tissue of the wound to create a wound matrix onto which cells can grow in order for the gaping cavity to close. This is a very costly procedures and the Saving the Survivors team rely on public support to make their work possible. Hope’s journey to recovery continues, but her will to survive and Marais’ dedication are proving to be a powerful combination. To follow Hope’s story, follow Saving the Survivors on Facebook.

Unfortunately, some rhinos are lost. In early 2016, Marais was contacted by the veterinary team from the Pilanesberg National Park to attend to another female white rhino named Shannon. She was critically wounded, with a badly fractured left foreleg. Her leg was broken when a poacher shot her. Marais explains that her prognosis was particularly bad because she sustained an open fracture of the radius and ulna. Open fractures are very susceptible to infection. Marais conducted the procedure successfully with her cast remaining intact for days after the procedure.

Towards the end of February, the Pilanesberg team found her dead, lying quietly underneath a bush, shortly after they had seen her grazing. Saving the Survivors reported that, from what could be seen, Shannon collapsed and died very quickly, without suffering. It was likely a heart attack or blood clot, which can also occur in people after fractures or operations. ‘She was found almost 5 km from where we treated her, which is incredible in itself. The cast was fully intact, and the wound underneath was much improved,’ says Marais.

Although sad, this case provided much valuable knowledge, which can be shared and applied in other situations. Marais successfully put a cast on fractures in a situation where it was previously thought impossible to do so.

Researchers from the Veterinary Wildlife Research Group in the Faculty of Veterinary Science are also working to better understand the rhino’s reaction to anaesthetic drugs, which drugs are best to use in these procedures, how effective veterinary drugs are in rhino and how best to administer them. Marion Leiberich is currently doing her master’s degree under the supervision of Dr Johan Marais and is looking at two drugs, enrofloxacin and carprofen, to establish how effective they are and how best to administer them to rhino. This pharmacokinetic and pharmacodynamic study will provide useful insights into treating injured rhino and will help vets make good clinical decisions based on scientific findings.

*The Saving the Survivors project is run by Johan Marais and his colleague at UP, Gerhard Steenkamp. 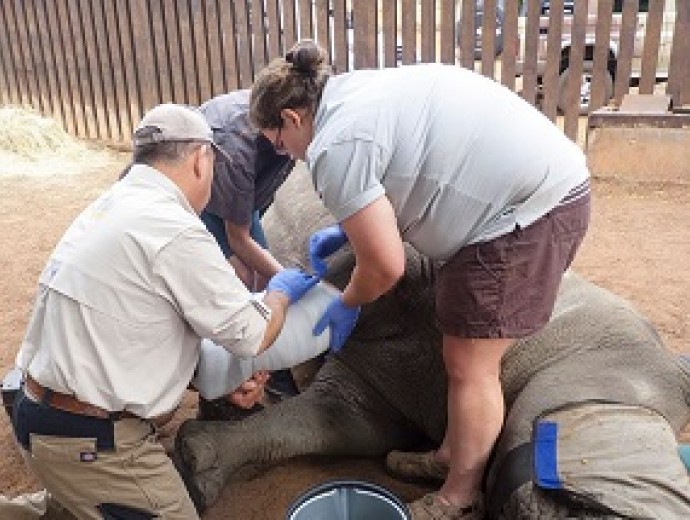